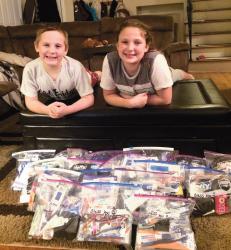 “I was excited to give [the care packages] to people with no homes who are in need for the holidays,” Samantha said.

Carrie Kazmirek said she had bought tickets to see the Radio City Christmas Spectacular for the family.

“I had seen a post on Facebook that the most needed item for the homeless is socks,” she said. “I just thought maybe we could give out socks.”

Kazmirek shared the idea at a Parent Teacher Organization meeting where she is a board member and the idea snowballed from there.

The family, through donations from the students and staff at the school, as well as friends, were able to put together 17 gallon sized plastic bags filled with socks, toothbrushes, soap, nonperishable food such as tuna fish and granola bars, as well as gift cards to McDonald’s.

“We also added some notes including ‘Bless you,’” Carrie Kazmirek said. “This was the first time we did something like this. Within 45 minutes from when we left Penn Station, we had given out all 17 of the care packages, which is kind of sad, but it’s something very nice and we definitely would do again.”

Samantha said the homeless people were very appreciative of their efforts.

Cheesequake Principal Thomas Ferry said the Kazmirek family’s act of kindness falls in line with the Old Bridge School District’s “Pay it Forward” campaign for the 2015-16 school year as well as the school’s “Kindness is Contagious” theme.

“We have done over a dozen acts of service as a school, but this idea was initiated by the family, which makes it that much more impressive,” Ferry said.

The district-wide “Pay it Forward” campaign was derived from the district’s theme, “Local Pride Global Impact” and introduced at teacher and staff in service day on Sept. 1.