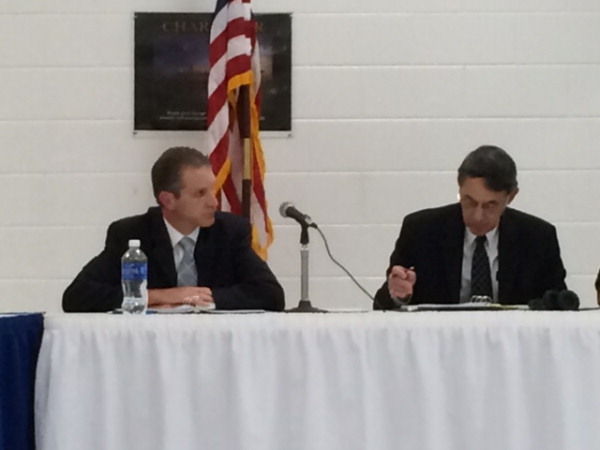 By Amy Batista, Special Writer
HIGHTSTOWN – The new East Windsor Regional School District superintendent has been on the job for one first week and is happy that the transition appears to have gone as planned.
“It’s been a great first week,” said new Superintendent of Schools Dr. Richard Katz. “It was a very smooth transition.”
“I would like to welcome you officially to your first board meeting,” said board member Christine Harrington at Monday night’s meeting. “It’s great to have you on board.”
Dr. Katz told the board that had had met with individuals and groups of people to start the learning process on people’s perceptions about the district’s strengths and weaknesses as well as some of the challenges the district faces. He said those meetings included staff, school leaders, parent groups and board members.
“In the coming months I will certainly organize all that information and share that, as a where are we going type of road map for the district,” said Dr. Katz.
He said one of the things he would like to do as a regular part of this report to the board is highlight some things that are happening in each of the schools.
“Tonight, I do have some information from each of the schools. That might not always be all six of them, but I want to make that a regular practice to highlight the great things that are happening, our student accomplishments and our staff accomplishments,” he said.
Dr. Katz added that the high school has had a number of on-site admission days. “Last week Rider was here, we had 14 students who received admission to Rider,” he said. He said they also received from $15,000 and up to $25,000 in grants.
Other colleges and universities conducting on-site admissions days included Montclair State, William Patterson, Fairleigh-Dickinson and Kane.
“It’s really an excellent program initiative for us to have here. It gives our students an early opportunity to receiver scholarships and money to help further their education. I thank our guidance department for putting all that together,” he said.
Dr. Katz reported that last Friday, 59 students in the high school got inducted into the French, German and Spanish Honor Society.
“That’s a great number and something to be darn proud of,” he said.
The Kreps (Middle) School robotics team – Robo Thunder – won Best Project Award at the (FIRST LEGO League) Steinert Slam qualifying event Nov. 21.
“They now move on to the next round which I believe is in St. Louis,” he said. “They presented a project on the harmful effects of Styrofoam.”
Dr. Katz reported that McKnight Principal Silvana Zircher is an editorial advisor for their Principal magazine, which is published by National Association of Elementary Principals.
“This month she is writing an article for them which will be a feature article titled Raising the Bar and she will be highlighting the process of McKnight’s for setting and monitoring academic and personal goals of students,” said Dr. Katz.
The Drew School report included news that the fifth grade chorus has been invited to attend the American Young Voices Concert.
“The Rogers School celebrated the opening of the first Reading Oasis Room in Mercer County,” he said.
At Walter C. Black, students are participating in Campaign Connect, which is something that has been happening at the high school and at the middle school.
“They are the first elementary school in the county joining Campaign Connect. which is really initiative to improve climate and culture but to develop leadership opportunities for students,” said Dr. Katz.
He said the district has received facility grants to do partial roof replacements at Black and Roger Schools and hopes to have those roofs worked on over the summer.