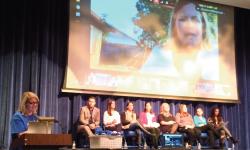 The fist annual World Language Symposium at Shore Regional High School saw former students coming together to share their multicultural and multilingual experiences with current and incoming students as part of a plan to grow and continue the conversation about the value and ramifications of actively engaging in the study of world languages and cultures. KAYLA MARSH/STAFF WEST LONG BRANCH – A symposium held by the Shore Regional High School faculty brought together former, incoming and current district students in a dialogue focused on highlighting the importance of embracing other cultures and the impact on learning different world languages.

“Our mission today is to continue a very important conversation that happens in our world language classes every day … about the value and the ramifications of actively engaging in the study of world languages and cultures,” said Alice Ann Ennis Simonson, a teacher in Shore Regional’s world language department.

Sixteen alumni attending the school’s first-ever World Language Symposium Nov. 25, both in person and partaking virtually from different parts of the world, offered students advice and first hand-accounts about how learning a second, third or even a fourth language and embracing a culture different from their own, can have a positive and changing impact on their lives.

“We live in a world that is becoming increasingly complex and divided Simonson said. “We believe that in order to heal our divides, we should not build walls, but instead build friendships and make connections.

“We have the ability to learn and grow this way through learning about and living in other cultures and embracing other languages. In this way we can cultivate mutual respect and understanding.”

Kyle Altenau, a 2007 Shore Regional graduate, said that since graduating, he has had the opportunity to travel all over the world, both alone and with family, and said his multicultural experiences have allowed him to connect with people he wouldn’t of had the opportunity to and got him out of his comfort zone.

“You learn to connect with people from different parts of life and people that you may not be able to build common ground and build empathetic relationships with,” Altenau said.

He said his most significant multicultural experience was the three months he spent living in South Africa, which he said, taught him more about himself then he expected.

“I moved down there without too much in the way of plans set up … and it definitely changed me forever,” he said. “I lived there for four months, but the important thing, aside from living in a beautiful city and getting to do all these fun things and hang out at the beach in December, you learn to connect with people who you wouldn’t be able to connect with when you come back home … and you learn to get yourself out of your comfort zone, and I can say that it has had a significant and very positive impact on me.”

Katherine Bazley, a 2010 Shore Regional graduate, said that she has always been interested in languages and culture.

“To me, a new language is a puzzle and figuring out where the pieces fit is really interesting,” she said. “The experiences of meeting new people, tasting new food and surviving in a foreign world are priceless.”

While taking Spanish and Latin in high school helped her learn how the two languages worked and what their cultures and civilizations were like, Bazley said it wasn’t until her experiences traveling abroad to Spain and Ireland and multiple other areas during her senior year in college that she caught the bug and realized traveling was “infectious.”

“Just meeting all these different people from all these different walks of life really helped me understand who I am,” Bazley said. “It was a humbling experience for me, and when I came back, I had such a clear understanding of who I am, who I want to be and how I fit into this world that we live in today, because I didn’t have that before I left.”

Heather (Trammell) Grindle, a 1998 Shore Regional graduate partaking in the symposium from Okinawa, Japan, said the experience of learning languages and embracing different cultures has impacted not only her personal life, but also her professional career.

“As a professional singer, I have experienced singing in many different languages,” she said.

Studying abroad in Wales in 2001, she said she met her husband there, and since his joining the Marine Corps, they have travelled to many places.

“Take that leap of faith, step outside your comfort zone … and go someplace that is not what you are used to,” Grindle said. “Expose yourself to other people, listen to their stories, have them teach you something you wouldn’t experience at home … it makes for a very interesting cultural experience.”

Casey Kapalko, a 2008 Shore Regional graduate joining the symposium from Chicago, Illinois, said that learning languages, embracing the traditions, the food and the traditions of other cultures has not only opened doors for her academically, but has allowed her to connect with the people of those cultures on a new level.

Towards the end of the symposium, Si- monson read a statement from Joe Tordella, a 1997 Shore Regional graduate currently in Russia who wasn’t able to attend, that she said sums up the purpose of the symposium and hopes will help the dialogue continue long after the symposium finished.

“The more languages we know, the more windows into other people’s lives we are able to open. And the more of those windows we can open, the closer we get to a world with more understanding, shared prosperity, and peace,” Tordella wrote.

“This dialogue needs to continue,” Simonson said. “We need to keep talking about the world and cultures and languages in other languages other than English.”

“We created this symposium to really show what it is like in the real world. These people attended Shore, they walked these hallways, they were in our language classes and they are showing how it has played out in their lives … [and] I think it is much more powerful than anything I can say as a language teacher – the proof is these individuals.”