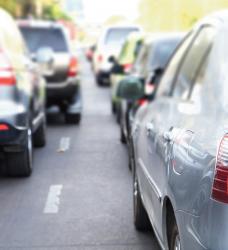 With more cars and trucks on the road, commuters are paying the price with increased travel times. Here’s where to find (or avoid) the worst gridlock while driving. It should come as no surprise to commuters that traffic on our nation’s highways is worse than its ever been, due largely to the increase in cars and trucks on the road spurred by a healthy economy. Unfortunately, what’s good for the nation’s financial fortunes can be bad for both car- and truck-drivers alike, and it’s shocking to see the actual impact — both personal and financial — of the country’s growing gridlock.

According to the 2015 Urban Mobility Scorecard compiled by traffic information and driver services provider INRIX and the Texas A&M Transportation Institute, motorists wasted a collective 7 billion extra hours last year sitting in traffic — that’s 42 hours per rush-hour commuter. What’s more, all those vehicles burned more than 3 billion gallons of fuel crawling their way to and from the office.

For many motorists, that amounts to a week’s vacation time and income down drain each year, and that’s not counting the potential productivity wasted just sitting in a car. Add up the numbers and the total value of time and fuel wasted amounts to an annual $160 billion, or $960 per commuter.

Findings from the 2015 Urban Mobility Scorecard are based on traffic speed data collected by INRIX on 1.3 million miles of urban streets and highways, along with highway performance data provided by the Federal Highway Administration.

By comparison, INRIX reports that back in 1982, when there were fewer vehicles sharing the road, the average traffic delay per consumer was just 18 hours per year with 0.5 billion gallons of fuel burned at a total cost of $42 billion. Though extreme gridlock affected only one out of every in nine commutes in 1982, it caused delays in an average of 25 percent of automotive excursions during 2014.

What’s more, the study found that traffic is getting so onerous in big cities that drivers find they have to allow more than twice as much travel time as they would otherwise require just to account for the unforeseen effects of bad weather, collisions, and construction zones. Drivers traversing America’s most congested roads typically waste 84 hours — that’s 3.5 days a year — sitting in traffic, which is twice the national average.

And the report’s findings indicate that the nation’s clogged arteries are spreading beyond the most populated areas. Though the average travel delay per vehicle is more than double what it was in 1982, it’s gotten four times worse in cities having populations with fewer than 500,000 people. And INRIX predicts commuters will be spending more time behind the wheel in the years ahead. Assuming the nation’s economic fortunes remain strong, by 2020, the annual rush-hour delay per U.S. motorist will swell to 47 hours, with a shared nationwide delay of 8.3 billion hours at a cost of $192 billion.

According to INRIX data, Washington, D.C. is the nation’s most traffic clogged city, where commuters suffered an average of 82 hours of delay last year, with Los Angeles coming in a close second at 80 hours, followed by San Francisco at 78 hours, New York City at 74 hours, San Jose, Calif. at 67 hours, Boston at 64 hours, Seattle at 63 hours and Chicago and Houston tied at 61 hours.

Unfortunately, there’s no easy way for the nation to simply build its way out of its traffic woes. “Our growing traffic problem is too massive for any one entity to handle — state and local agencies can’t do it alone,” says Tim Lomax, a report co-author and Regents Fellow at TTI. “Businesses can give their employees more flexibility in where, when and how they work, individual workers can adjust their commuting patterns, and we can have better thinking when it comes to longterm land use planning.”