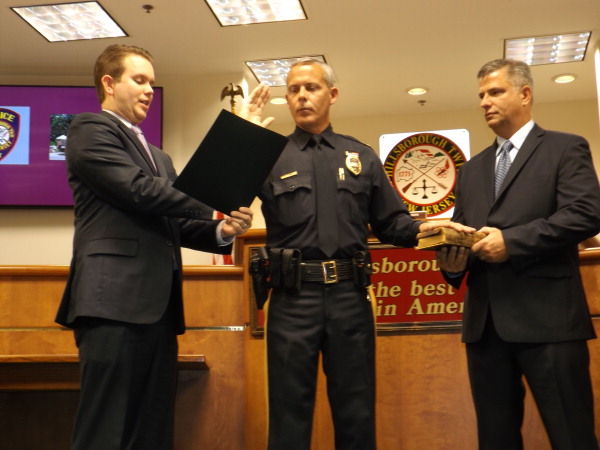 Lt. Darren Powell was unanimously voted as the township’s acting police chief Tuesday night.
The Township Committee chose Mr. Powell from the three eligible lieutenants on the force, giving him an early birthday present. The acting chief was 51 yesterday, Dec. 17.
Paul Kaminsky, who has been police chief since 2006, will retire effective Feb. 1. He joined the force in August 1989.
Capt. Paul Merkler is also retiring as of the end of the year; the captain joined the force in 1990.
Acting Chief Powell, who had been a lieutenant since 2008, will now evaluate the two possible candidates for the second-in-command job as captain. The two are Lts. Fran Mozgai and Mark Besser. Lt. Kenneth Pryor doesn’t have sufficient service time at the rank to qualify.
The Township Committee will appoint a captain, probably in the February time frame.
The 52-person force also has seven sergeants and six corporals. Two entry-level officers were hired and sworn in Nov. 10.
Chief Kaminsky said his successor was “always mission oriented, extremely professional, and excellent at any task. It’s been an honor and privilege to work with him for 20 years. As a resident, I’ll sleep very soundly know he’s in charge of the day-to-day operations of the police department.”