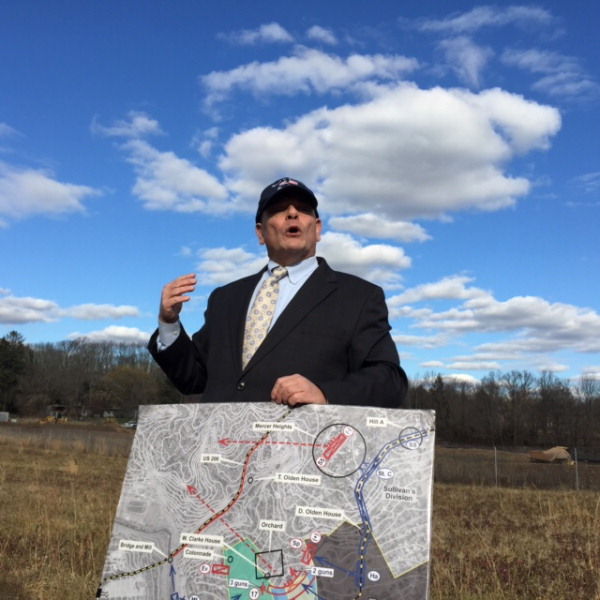 By Philip Sean Curran, Staff Writer
State lawmakers have stepped up their fight to block the Institute for Advanced Study from building faculty housing on a section of the Princeton Battlefield that the IAS owns and has begun clearing.
They want the state’s top environmental regulator, state Department of Environmental Protection Commissioner Bob Martin, to issue a stay on a wetlands permit the IAS needs for the 15-unit project. Also, a state Senate committee plans to hold a hearing Monday on the project.
The flurry of activity comes with the IAS pressing ahead with a project that the Princeton Planning Board approved but the nonprofit Princeton Battlefield Society is suing to stop. The society says the land and all the potential artifacts buried in the ground must not be lost to development, the place where George Washington staged a winning counterattack during the battle of Princeton in January 1777.
“We cannot, and will not, allow this hallowed ground to be irreversibly decimated,” said state Sen. Kip Bateman (R-16) in a statement Wednesday.
Members of the Battlefield Society joined Assemblyman Reed Gusciora (D-15) at a press conference Wednesday afternoon not far from where earthmoving equipment was busy at work. In his remarks, Mr. Gusciora said Mr. Martin should put a hold on the permit until the society lawsuit is resolved, a case due to be heard in a state appeals court.
He criticized the IAS for wanting to put “clothes line and houses” on “sacred ground where people died and fought for our country.”
“They’re on the wrong side of history. We’d really like them not to bulldoze our history but to help preserve it,” he said, with the sound of a dump truck’s backup warning echoing in the distance. “At the end of the day, the institute should do the right thing and help preserve this land for (the) future.”
An IAS spokeswoman directed a reporter to a statement the IAS issued last week saying it was moving ahead with the project.
DEP spokesman Larry Hajna said Thursday afternoon that, “DEP has no authority to issue a stay on a matter it has no jurisdiction over. Stays are issued by courts.”
The IAS is developing around six acres out of a roughly 21-acre tract, with the rest due to be left as open space. Mr. Gusciora said he did not know why the state did not use its power of eminent domain to acquire the property. The Civil War Trust, a Washington D.C.-based nonprofit, has offered the IAS $4.5 million for the entire parcel.
Mr. Gusciora said the faculty housing could be put in another part of its property or in downtown Princeton.
Society vice president Kip Cherry called it “upsetting” to watch the land be disturbed. “But we have too much to do to be sitting around being upset. We’re trying to stop the project immediately,” she said.
The Battlefield Society contends the IAS is encroaching upon wetlands. Society president Jerry Hurtwiz said a 1990 survey the IAS commissioned found wetlands, only for the IAS to do another study around 10 years later finding no wetlands.
“There’s a lot of funny business about how this application for their permit was done,” he said.
“These are claims that counsel for the opponents of the project made during the meetings with the Princeton Planning Board — which unanimously approved the institute’s plans — and were subsequently reviewed in the course of Judge (Mary) Jacobson’s appeal ruling, which was decided in the institute’s favor,” IAS spokeswoman Christine Ferrara said last week.
In a letter last week to Mr. Martin, Mr. Gusciora said that the Battlefield Society’s hydrologist Amy Greene — who did the 1990 study for the IAS — “has identified new wetlands on the site that were not known to DEP at the time of its field investigation in 2000 and 2005.”
“I believe your office can issue a stay of the wetlands permits that date to 2000 on the basis of this evidence of new wetlands,” Mr. Gusciora wrote.
He wrote that federal law requires that once wetlands are confirmed, construction is halted and there has to be a historical survey and analysis done “as to adverse impacts on the historic site.”
Mr. Gusciora said Mr. Martin has not responded to his letter.
Princeton Mayor Liz Lempert, who voted as a planning board member in 2012 to approve the project, on Wednesday stood by her vote and said the board had little leeway in turning down the IAS. 