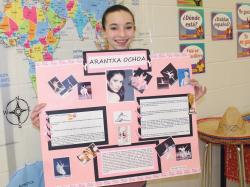 MEMS pupil Sydney Block is a dancer who created a project about Arantxa Ochoa, a celebrated ballerina in the Pennsylvania ballet. A girl who studies Spanish at the Manalapan Englishtown Middle School (MEMS) recently had an exciting encounter.

To celebrate Hispanic American Heritage Month, Spanish teacher Chandler Oliphant asked her eighth grade pupils to conduct research and design a poster to honor the life and accomplishments of a famous Hispanic American.

“One of my students, Sydney Block, is a serious dancer, so she decided to research Arantxa Ochoa, an accomplished Spanish ballerina who currently practices her art in the United States,” Oliphant said.

Sydney, 13, who is the daughter of Elly and Doug Block, said she was half joking when she told her mom she wanted to share her project with Ochoa, who is a celebrated dancer in the Pennsylvania ballet.

“My mom said it was actually a great idea,” Sydney said. “Then the next day she sent (an email) to her.”

In her email, Elly Block told Ochoa that Sydney is taking honors Spanish and chose to reflect how Ochoa is a hero.

“My daughter is a dancer, and although your name was not on the teacher’s list, she asked if she could do her project/poster on your life,” she wrote to Ochoa. “We thought you might be interested in seeing her finished project.”

Ochoa responded with a sincere thank you note in which she said, “This is beautiful. Thank you for sharing it with me. Please tell (Sydney) that I feel honored she has chosen me and that I would love to meet her sometime. You mentioned that Sydney dances … is this something she would like to do as a career, what kind of dancer is she?”

Sydney said at first, she did not believe it when her mom told her that Ochoa had responded.

“I was very excited,” the young woman said. “I didn’t think someone like Arantxa would even have time to open her email, let alone respond.”

Oliphant said her supervisor, Paul De- Marco, believed it would be nice to share the news because it demonstrates how the World Language Department at MEMS is able to make connections with Spanish communities outside the middle school. Sydney said she picked Ochoa because she seemed like an interesting person. The project surpassed her expectations and Sydney found Ochoa to be inspirational.

“I realized I have a lot in common with her,” she said. “She says she does not have a perfect ballet body and I don’t either. For example, my feet pronate (the inward roll of the foot). I also have flat feet. I have to work a little harder because of my imperfections.” Sydney thanked her parents for their support. “My parents were just as excited for me as I was,” she said. “I want to thank them for all their support with dance. They know how much I love it and how important dancing is to me.”

Sydney has been dancing for 10 years. Ballet is one of her favorite dance forms, but she does many other kinds as well. She is a competitive dancer at Center Stage Dance and Theater School, Marlboro and East Brunswick.

In the future, Sydney said, she hopes to participate in a ballet company and would love to have any job in the dance field. Appearing on Broadway is one of her many goals.

“I would love to keep in touch with Arantxa,” the young woman said. “Arantxa gave me some hope because she worked through her imperfections and ended up becoming the principal dancer in a ballet company.”