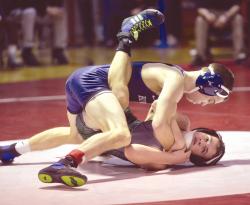 There aren’t many teams that can lose four NJSIAA District medal winners and still be a serious championship contender.

However, that’s where the Howell High School wrestling program is. It’s next man up at the school, and the holes get filled for the Rebels, who head into the 2015-16 season among the contenders for Shore Conference Tournament and state sectional championships.

It would seem hard to duplicate that success, but this team has the potential to do that and more.

Kyle Slendorn, the district champion at 106 pounds, is wrestling at 120 this winter, and Anthony Gagliano, who finished third in the district at 132, will wrestle at 138 as part of a deep, experienced lineup.

Slendorn had a marvelous freshman season, going 37-3 and qualifying for the states championships in Atlantic City, as did Gagliano, a senior, who went 33-8.

Kris Lindemann (145), who has battled injuries the last two years, has won a district title in the past. He was 25-10 last year and took third in District 21.

Lindemann and Gagliano, who have 86 and 80 career wins, respectively, should surpass the 100-win mark during the season.

Keosseian, Slendorn, Gagliano and Lindemann made it to Atlantic City last year.

The sixth returning district medal winner is junior Peter Dee (126), who took third in the district, and was 27-9.

Howell is loaded from 120 to 145 with Slendorn, Dee or Dan Esposito (a sophomore who went 14-4 last year), Gagliano and Lindemann. Teams will be hard-pressed to get through this juggernaut.

There is little question where the heart of the lineup is.

The Rebels’ most pressing concern is up top, where they lost three medal winners. Keosseian, at least, can be a stopper up top.

“I think our biggest concern this season is the lack of experience in our upper weights,” said John Gagaliano, who is in his 19th year coaching his alma mater and has a career win-loss record of 355-69. “We have kids up top that are working extremely hard and will keep improving as the year goes on.

“We have a few incoming freshmen that have a lot of experience and some upperclassmen that worked hard this past offseason and are ready to go. They are a hard-working group.”

Among the newcomers are sophomores Jesse Liptzin and Zach McConville at 103, freshman Darby Diedrich and sophomore Eric Megaroi at 113, sophomore Eli Orford at 120, junior Jon Friedman at 132, senior Cameron Ayesh at 138, junior Nick Sulkowski at 145, senior jack Kirk at 170, senior Zack Barnes at 182, senior Ryan Marter at 195 and junior Jacob Nash at heavyweight.

While Howell is among the preseason favorites for the Shore Conference Tournament and NJSIAA Central Jersey, Group V championships, the first objective is the Shore Conference A North Division. Howell has won the division the last 10 years and is taking nothing for granted as it seeks to begin a second decade of domination.

“I think A North will be extremely competitive this year with [Christian Brothers Academy (CBA)] returning the most returning varsity letter-winners,” the coach said.

“I also think both Middletown [North and South], Manalapan, both Freehold [and Freehold Township] and Marlboro return a lot and are much improved from last year.”

Howell opens its campaign Dec. 19 in a tournament at Paulsboro High School that the Rebels won last year.

The Rebels will go to Brick Memorial for another tournament Dec. 28.

When 2016 begins, the dual-meet season takes off.

The key match of the A North season figures to be Jan. 7 when Howell hosts CBA.

“We are a young, unproven group with a lot of talent,” Pressman said. “However, there is a ton of talent on the roster. This group had a great offseason.”

Although they also lost a lot to graduation — led by state place-winner Jake Kaminsky — the Braves have a balanced lineup that, while young, does have some experience.

Twenty-match winners Ronny Ghiada (152) and Joe Marano (195) are the key returnees. Marano is a senior and Ghiada is a junior.

Transfer Masimo Miello is expected to make an impact at 126.

Pressman likes the team’s depth and balance this year.

“At many weights, we have multiple guys that can win varsity matches,” said Pressman, who added he expects his team to improve over the course of the season and be dangerous by later stages of the dualmeet campaign.

Manalapan will start its season off in the tournament at Nottingham High School. The Braves face an early season test Dec. 22 when they wrestle at CBA.

On Dec. 28, they will be at the Middletown South Tournament.

Matt Shepherd’s Freehold wrestling team took a major hit to graduation. The Colonials lost 112 wins from their five graduated seniors, including District 21 champion Colin Monahan (113). That has the team in rebuilding mode.

“With only have two seniors in the program; we will have an extremely young lineup,” Shepherd said. “The young guys do have some varsity experience, and we put in a good offseason of work. We are looking to improve throughout the lineup.”

Freehold is in the Princeton Classic at Princeton High School Dec. 19. The Colonials will also compete in the Holmdel High School Tournament Dec. 29.

Colts Neck High School, which competes in the B North Division, was a state tournament qualifier last year, and head coach Brett Jankos thinks his club is ready to take the next step and be a top-10 team in the Shore area this year.

The Cougars return a lot of experience from last year’s 15-9 team, led by Joey King (113), a District 21 and Region 6 runnerup at 106. King was one of the outstanding impact freshman last winter, going 36-4 and qualifying for Atlantic City.

This is a team, while still young, that has a lot of experience and will be very dangerous.

The Cougars go to the tournament at Brick Memorial Dec. 19 to kick off their season.