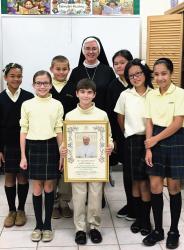 Sister Cherree Power and pupils at the St. Veronica School, Howell, display the papal blessing the school received from Pope Francis on the occasion of its 50th anniversary. JENNIFER ORTIZ/STAFF HOWELL — Sixth-grader Faith Wittstruck was able to easily express her feelings when asked what she likes about attending St. Veronica School, Route 9, Howell.

“I like St. Veronica School because it feels like a second home to me, but also because we are allowed to talk about our faith, which you are not allowed to in other schools,” she said.

St. Veronica School is celebrating its 50th anniversary this year. The school enrolls 205 pupils in pre-kindergarten through eighth grade.

“We are celebrating the changes we made to make our school a better place,” Faith said.

Principal Sister Cherree Power said the changes were made possible by the teachers, parents and wonderful spirit of the children, allowing the school to celebrate its 50th anniversary.

“I have the most wonderful parent-teacher association in the world. I ask for the stars and they give me the moon,” Power said. “But also the kids. This year in particular we had a school near us that closed and we have children who came from that school and we are trying to meld two schools together.

Power said the St. Veronica pupils opened their hearts and welcomed the youngsters from Holy Family into their new home.

“We have a very generous group of students. We talk about social justice and they do a lot to help the community in many ways,” the principal said. “Within our diocese we have the Propagation of the Faith where our students raise money for missions and this year we had a Mass in Trenton.

“Representatives from each school went and the bishop was there … and at that Mass we received a plaque because our students have given the most money for the missions. That was a big deal. The money is sent to poor countries to help, so they are very generous,” Power said.

St. Veronica will celebrate its 50th anniversary with events that include a dinner dance and an alumni reunion.

“I like how for 50 years we have fostered reverence, respect and responsibility,” sixth-grader Michael Lamastra said.

Power said is the motto of the school.

The school has received a papal blessing from Pope Francis.

“I am one of the Sisters of the Resurrection and I belong to an international community so our motherhouse is in Rome. I asked one of our sisters to go to the Vatican to request one and she went to get it for us,” Power said.

A typical day at St. Veronica includes prayer when students arrive and prayer at the end of the day.

“Once a month the students go to Mass together and we are so lucky because the church is connected to the school. At other times during the year we will have a special Mass or prayer service,” she said.

Sixth-grader Samantha Jose said she enjoys attending Catholic school and added, “It is just so nice to have Mass every month …”

Sixth grader teacher Carole Howell said a student who exemplifies a certain virtue is selected each month and recognized at the Mass.

Power is in her 24th year as the school’s principal. She taught at St. Veronica from 1980-90 and then left for two years to serve as a principal in New York. She returned to St. Veronica in 1992 as the principal and remains in her post today.

She said the dedication of the teachers, pastors, parish and parents has brought St. Veronica School to this milestone.

“Financially, it is a big strain on the parish and it is a big sacrifice for parents. They live in a town like Howell where the schools are excellent and they are making sacrifices and choosing to send children to our school. They have to pay (for private school) when they are paying hefty taxes as it is. It is the dedication and commitment of parents. Together, we make St. Veronica School a big family,” Power said.