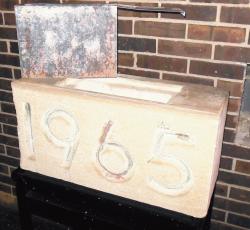 A time capsule filled with handwritten letters in script by students in 1965 to the students in 2015, class photos, yearbooks and other mementos were unveiled at a celebration at Southwood Elementary School in Old Bridge on Dec. 1. OLD BRIDGE — The year was 1965: The war in Vietnam was escalating, Lyndon B. Johnson was the president of the United States and the British rock band “The Beatles” was all the rage.

Glenn Zellers, who was an eighth-grade student at Southwood Elementary School at the time, said what he enjoyed most about living in 1965 was McDonald’s and “Mike the submarine shop.”

“McDonald’s is a 15-cent hamburger place on Route 18 in East Brunswick,” he wrote. “Another place is Mike the submarine shop on Matawan Road in Old Bridge.”

Zellers’ letter to the class of 2015 was one of many letters found in a time capsule that was unveiled at a celebration at Southwood Elementary School on Dec. 1. 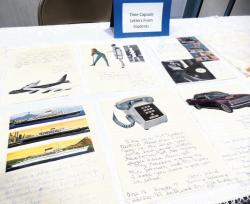 Last spring, Principal Karen M. Foley said Tim Craft of the Department of Maintenance at the school took a look behind the 1965 cornerstone, which revealed a treasure trove of mementos from the school.

“The find was pretty impressive,” she said.

The items in the cornerstone included hand-written letters in script by the pupils to their 2015 counterparts. Others included class photos, yearbooks and other mementos.

“Hello. How is your flying car?” student Charles Miller wrote. “I always wondered when the world would be like the Jetsons on TV. … The houses must look very weird.” 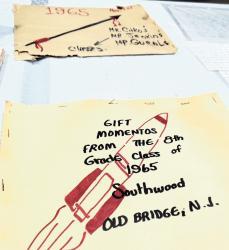 Also participating was Melanie Minch- Klass, a 1969 graduate of Southwood, who is now supervisor of special services in the district. She read a letter from former Schools Superintendent Andrew Korshalla.

Staff members chose favorite portions of letters to read, which let students know the conditions at the time, from President John F. Kennedy being assassinated two years prior, to the war in Vietnam, to race relations that resulted in riots in Los Angeles, Mississippi and other southern states.

“There is a war going on in Vietnam now,” wrote student Kathryn David. “The United States has won some of the battles and the [guerrillas] have won some.”

One pupil asked the students of 2015 if the United States won the Vietnam War.

Other fun tidbits of the time included an early Touch Tone telephone and box television; boxer Muhammad Ali defeated Sonny Liston for the World Heavyweight Championship; and the average cost of a house was $13,600 and a gallon of gas sold for 31 cents.

Liebowitz spoke about her time at Southwood as an educator, which was at the time of the building expansion.

Principal Karen Foley said the school, after emptying the time capsule’s contents, plans to refill it with memorabilia from current Southwood pupils so it can be reopened in 2065.