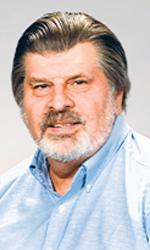 Thomas Vahalla Metuchen Mayor Thomas Vahalla can add Borough Council meetings to the list of venues that bring tears to his eyes.

“It’s kind of overwhelming up here tonight,” he said as he addressed the crowd that honored his 23 years of service — mayor since 2007 after serving as councilman since 1993 — to the community at a council meeting on Dec. 7. Vahalla, who opted not to run for re-election in November after the borough’s Democratic organization lent its support to former Councilman Peter Cammarano, said there were only two places that he would cry — weddings and state championships.

However, the recognition by state, county and borough officials brought tears to his eyes.

“I always worked hard caring about all the people in Metuchen trying to meet up with the expectations and goals established,” said Vahalla, thanking everyone for their kind words.

Police Chief David Irizarry presented Vahalla with a plaque. He said Vahalla’s dedication to public safety — police, fire and emergency medical services — was second to none.

“We appreciate that,” he said. “[Vahalla] really has a connection to the community and cares about the people in the community.”

Irizarry said Vahalla means it when he says, “Let me know if there is something that I can do.”

“Like Chief Irizarry said, every fire call we go on, he was there; if a firefighter was hurt, he would go to the hospital and be there,” he said.

Donnan, who noted that he met Vahalla when he was a student at Metuchen High School in 1983, said Vahalla was instrumental in the move forward for a new firehouse.

A task force is weighing options for a site on which to build a replacement for the borough’s blighted firehouse.

“Tom cared,” Peragallo said. “He has done nothing but positive.”

“Metuchen is a unique town and as mayor [you were] faced with unique challenges,” said Barnes.

“You are a person who really cares for the town and cares about the citizens,” he said.

Tomaro said Vahalla has been the champion for the Metuchen community with the push for a new firehouse and Middlesex County Greenway, which runs through Edison, Metuchen and Woodbridge.

“Metuchen has really embraced the greenway more so than Edison and Woodbridge,” Tomaro said adding that the most difficult job is the mayoral position. “Everyone wants the mayor … you get that phone call at 3 in the morning.”

Rasmussen read into the official record the council’s proclamation, which outlined Vahalla’s achievements, including boosting the morale of the Metuchen Police Department, streamlining garbage collection, and the ongoing Pearl Street development, which will be home to a Whole Foods.

Vahalla will lead his last council meeting as mayor on Dec. 21.