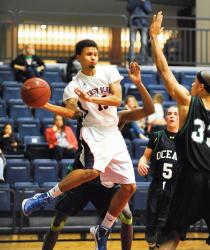 Brookdale Community College’s Aaron Trimble, left, a Howell High School graduate, looks to pass the ball to an open teammate after the Ocean County College defense collapses around him during the Dec. 10 game played in Brookdale’s Collins Arena. The Jersey Blues, who are off to a 9-2 start, edged the Vikings, 71-69. STAFF PHOTOGRAPHER ERIC SUCAR The Brookdale Community College men’s basketball team has had an almost complete turnover of its roster from last year.

Yet, despite having nine freshmen on the team, Paul Cisek’s Jersey Blues are sporting a 9-2 record and are very much in the conversation about the best teams in Region 19.

“We’ve started off pretty good,” said Cisek, who is in his 25th year as Brookdale’s head coach. “We’re young and we’re learning from our mistakes.

“These kids are talented. I’m not surprised at our start.”

Sophomore Mason Jones, from Manchester Township High School, played for Brookdale two years ago and his return is giving the Jersey Blues a lift.

“[Jones] has a lot of potential,” Cisek said. “He’s shooting the ball well from three and he gets to the basket. He’s quick.

“He can do it all, and he plays at an intense level.”

Jones’ impact on the team has been big. He leads the team in scoring with 21.8 points per game and assist with three per game.

Jones gives Brookdale a second ball handler to go with Cox, which is even more important this year because of the new college rule changes.

The shot clock is now 30 seconds (down from 35), and there is no five-second rule. A ball handler can now hold onto the ball, which brings the dribble-drive into play even more.

In Cox and Jones, the Jersey Blues have guards who can take advantage of the new rule. Brookdale is running more and getting easy baskets because of its backcourt.

Those breakouts and fastbreaks are made possible because the Jersey Blues have been able to control the backboard.

“This is the biggest team we’ve had here,” Cisek said.

Between them, they are averaging more than 21 rebounds a game. Little has 12.2 boards per game, while also averaging 3.4 blocked shots a game.

Sky Harris (Cardinal McCarrick) is the team’s small forward. At 6 feet 4 inches tall and athletic, he can rebound and finish. He’s averaging 11.6 points and 4.8 rebounds.

Brookdale’s freshmen are making their presence most felt off the bench. They add both production and depth.

Already, the depth has made a difference in games with Brookdale wearing teams out and wining games in the second half.

“We’ve been fortunate because of the depth of our young freshmen,” Cisek said.

First off the bench is Howell High School graduate Aaron Trimble, who is a scorer. He’s adjusting to college ball and getting better with each game. His Rebels’ teammate from last year, Will Kocsis, helps out up front. He’s 6 feet 5 inches tall.

Kerry Kirkwood (Neptune) is the backup point guard, and he has the speed and ball handling the position requires.

These five freshmen are still figuring out the game, according to Cisek.

One area where youth is most visible is defense, which needs continuity and familiarity. It has made Cisek stray from his preferred man-to-man “We’ve been forced to play zone, 2-3 and 1-2-2,” Cisek said. The solid start by the Jersey Blues (7-2 in region play) has them well positioned for a high seed in the Region 19 Tournament, which is Feb. 27-28 at Northampton Community College in Bethlehem, Pennsylvania.

As Cisek knows, the Jersey Blues have a lot of basketball to play before then.

“There’s a lot of parody [in Region 19] this year,” Cisek said. “You have to win at home and beat the teams you should on the road.”

The Jersey Blues have a decided edge playing at the Collins Arena, where they’ve been close to unbeatable. Brookdale opens 2016 at home Jan. 9 against Sussex County Community College at 2 p.m. Union County College visits Jan. 16 at 12 p.m.