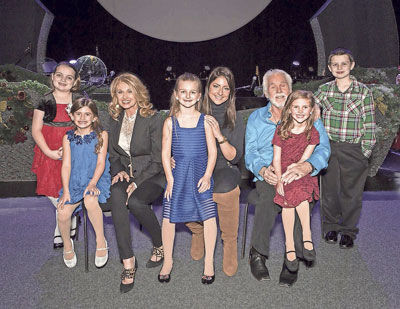 By Gene Robbins, Managing Editor
When young Abby Krawski asked, “Is there a Santa Claus?”, singer Kenny Rogers told her “yes”. . . on stage.
Seven-year-old Abby and four friends had the lucky fortune to perform with Mr. Rogers and singer Linda Davis in a Dec. 10 show at the State Theatre in New Brunswick. They sang on stage with the entire troupe of the “Once Again It’s Christmas” show.
Mr. Rogers entertained during the first act with some of his greatest hits, like “The Gambler” and “Islands in the Stream.”
The second act was Christmas-themed. Abby was the first to enter with a “Yes, Virginia” monologue concluding with the words “Please tell me the truth. . . Is there a Santa Claus?”
Kenny’s voice could be heard responding that there was indeed.
Enter the rest of enthusiastically skipping children to sing a rendition of “I Believe in Santa Claus.”
Other songs included “Painting the Town” and “Silent Night.” The final number included the kids taking the stage with Mr. Rogers, Ms. Davis and the choir to sing “Joy to the World.”
“At first I thought it was just Christmas songs, then I thought they were singing Kenny Rogers’ Christmas songs, and then I realized it was actually with Kenny himself,” said Keri Krawski, Abby’s mother and a reading specialist at Hillsborough Elementary School.
Abby performed with Hillsborough friends Mikayla Genovese, 7, and Adriana Brenycz, 7, as well as Franklin Park youngsters Marley, 8, and Jack Bozinta, 10. Adriana goes to Woodfern School, and Abby and Mikayla attend Sunnymead School.
Ms. Krawski fell into the opportunity when she was performing in December in “9-5, the Musical” by the Somerset Valley Players. One of her fellow castmates, Hanna Wasserman, works as the production administrative assistant at the State Theatre and was in charge of finding five adorable children to participate in the New Brunswick stop on the show’s tour, said Ms. Krawski.
“She heard me talking about my daughter being a part of the competition team at Flair Dance Academy and asked if she’d be interested in singing at the Christmas performance at the State Theatre,” said Ms. Krawski.
They needed five children, so Ms. Krawski asked two of her friends whose daughters are on the dance team as Abby. The other two children are a son and daughter of Mary Kate Bozinta, one of the other cast members.
Amanda Grace, the director of Flair Dance Academy in Hillsborough, remained backstage as the “kids director.” Abby, Adriana and Mikayla take an array of dance classes, as well as being members of the elite competition team, at Flair.
“They love their dance teacher, Miss Amanda, and were thrilled she was going to be backstage guiding and supporting them,” said Ms. Krawski.
Throughout the evening Mr. Rogers told jokes, shared video clips and encouraged everyone to sing along. He said this would be his last Christmas tour.
“It was truly a magical night we will never forget,” said Ms. Krawski. “He is truly a legend, and this was definitely a once-in-a-lifetime opportunity for these five lucky kids. They had an absolute blast. Our little stars certainly shined on that spectacular stage.” 