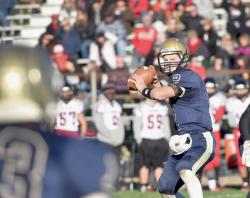 Manalapan has been the standard-bearer in the district the last several years with four consecutive appearances in the state sectional finals from 2011-14. Ed Gurrieri’s Braves won the NJSIAA Central Jersey, Group V championship in 2014.

This fall was a transition year for the Braves. Gurrieri had few starters back on either side of the ball, and the team was exceptionally young at the skill positions. Add to that injuries, and it was a recipe for trouble. Yet the Braves still found a way to qualify for the postseason and play their best ball there. As the No. 5 seed, the Braves went on the road and beat No. 4-seed Trenton Central High School, 20-7.

They pushed eventual champion South Brunswick High School to the bitter end, losing on the last play of the game, 27-21, in the semifinals to finish 6-5.

The Braves rode their experienced offensive line led by Joe Sellmeyer on offense. Marcus Salinas continued the Manalapan tradition of 1,000-plus yard rushers, running for 1,325 yards and 11 scores.

For Dave Ellis’ Colonials, it was important to back up last year’s 7-3 playoff team. Thanks to quarterback/safety Jake Curry, Freehold did just that, going 6-4 and taking the Shore Conference A North Division race down to the final game before losing to champion Middletown High School South.

The Colonials lost to Allentown in the Central Jersey Group IV playoffs.

Curry accounted for 19 touchdowns, passing for 12 and running for seven, and he accumulated more than 1,600 total yards for Freehold’s offense.

Ashante Worthy gave the team an explosive running back, rushing for 1,398 yards and scoring 13 touchdowns. The sophomore has given the team a building block for 2016.

At Freehold Township, Cory Davies brought excitement and the school’s first state playoff performance since 2001 in his first year with the Patriots. Davies’ pass-friendly Air Raid offense, which carried Howell High School to a state title in 2007, led quarterback Jack O’Brien to numerous school records — including 2,000 passing yards and 20 touchdown passes — and receiver Adrian Rybaltowski to a receiving mark of 44 catches.

Freehold Township (4-6) was beaten by No. 2-seed New Brunswick High School, 21-14, in the opening round of the Central Jersey Group V tournament.

The Player of the Year was the Colonials’ Curry, who shined on both sides of the football.

He was one of the top dual-threat quarterbacks in the Shore and had some remarkable games, such as the 14 for 14 passing performance for 261 yards against Toms River High School East or his 335 yards of total offense against Marlboro High School.

“Jake is definitely the center of our offense,” Ellis said during the season. “He has a total understanding of our offense. With Jake running and throwing, we feel pretty good.” As gaudy as his offensive stats were, he may actually have been even better on the defensive side of the ball. He was among the leading tacklers on the team with 104 on the season, and his six interceptions ranked among the best in the state.