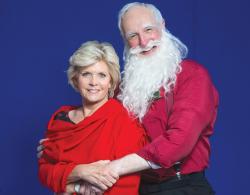 In Lifetime’s holiday original movie Becoming Santa, Holly (Laura Bell Bundy) brings her boyfriend (Jesse Hutch) to meet her family and reveals that not only are her parents Santa and Mrs. Claus, but also whoever she marries will become the next Santa.

There’s no one better to play the quintessential holiday couple than Meredith Baxter and Michael Gross, who played TV’s perfect parents on Family Ties. Baxter offers a little secret about portraying Mrs. Claus. “She may be iconic, but no one knows what she really looks like!” The actress figures, “Whoever we say she is — that’s who she is!”

The actress reveals that she enjoys working on holiday films because of the strong family storylines, but the flick’s biggest draw was the opportunity to work with her good friend.

“As soon as I knew he was attached, I didn’t even bother reading the script,” she jokes.

“The interesting thing about this particular script,” muses Baxter, “is the idea that the women of the Claus family are the ones who determine who is the next Santa.” She adds, “As light as this film is, for my character there’s an undercurrent of, ‘OK, this is serious business.’”

Baxter reveals that her favorite off-set activity was reading, while Gross spent his time with his fans.

“It was very, very hot where we were shooting and Michael was wearing a big fat suit,” she recalls with a laugh. “We had a huge fan in the green room and while we weren’t working, he would just position himself in front of it. He was this large, lumpy personage, just trying to stay cool.”

As for if she remains in touch with her other Family Ties cast members, particularly her TV children, Baxter shares: “Not on a regular basis, no. That’s why I covet those times when we can get together, which is really so sweet to see them. They’re such good people and good parents. I love that we raised good children who are good parents.”

That’s the most common question she gets from fans, too. “They want to know how’s Michael Fox. They want to know if we see each other, we talk to each other. I often hear, ‘I wish you’d been my mother.’ That’s a woman who’s strong and loving and has the time to sit down and spend time with her kids the way many parents don’t have a chance to.

“The fact that all the characters seemed to have some longevity in people’s hearts and minds is just lovely. It’s rare I think that that happens, and when it does it’s really glorious. I think people liked our family because we liked each other so much.”

Lifetime airs an encore performance of Becoming Santa on Dec. 25 at 10 p.m.