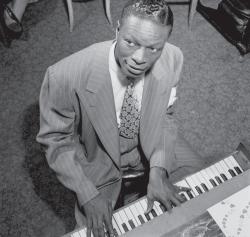 Among the many joys of the holiday season are the classic, beloved songs that have been passed down from one generation to the next, bringing together listeners young and old. Among the most notable and nostalgia-provoking is the delightfully ubiquitous “The Christmas Song,” subtitled “Chestnuts Roasting on an Open Fire.” Everybody knows a turkey and some mistletoe (and the baritone voice of Nat King Cole) help to make the season bright.

Nathaniel Adams Coles was born on March 17, 1919. The son of a Baptist minister and a church organist, he was immersed in a musical lifestyle at a young age. By the age of 4, he was performing for his father’s congregation, and by age 12 he had begun classical piano lessons.

Although Nathaniel was born in Montgomery, Ala., he grew up in Chicago, where he was influenced by such club performers as Louis Armstrong and Earl Hines. In his mid-teens, driven to pursue a career in music, he dropped out of school to play full time.

He landed a gig with the nationally touring revue “Shuffle Along,” but faced a standstill in Long Beach, Calif., when the act floundered abruptly. In Long Beach, he formed the King Cole Trio (by that time, he’d adopted the nickname “Nat King Cole”), a jazz group that toured extensively throughout the late ’30s and early ’40s. In 1943, the trio signed with Capitol Records, with whom they released the breakout hits “That Ain’t Right” and “Straighten Up and Fly Right.”

In 1946, they recorded the now-classic tune “The Christmas Song.” Cole later recorded three alternate versions; the fourth, recorded in 1961, is the most famous and the one still played on the radio today.

Cole married twice and raised five children, among them Grammy-winning artist Natalie Cole. He passed away in 1965 due to lung cancer, with wife Maria by his side. In 1990, he was posthumously awarded the Grammy Lifetime Achievement award, and in 2000 was inducted into the Rock and Roll Hall of Fame.