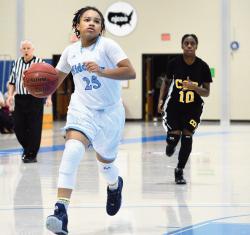 Middlesex Community College’s Ziykara Hicks, driving for two in a recent game at the Community College of Philadelphia, was named the Garden State Athletic Conference (GSAC) Player of the Week when she averaged 25 points, three steals and 3.5 assists a game in leading Middlesex to a pair of victories. The Middlesex women’s basketball team is 11-1 overall, first in the GSAC with a 7-0 mark and tops in Regional 19 with a 10-0 record. MATT DENTON Both the North Brunswick Township High School and South Brunswick High School girls’ basketball teams opened their seasons with wins Dec. 18.

Coach Shaun Morrell’s Raiders, looking to turn things around after going 6-19 a year ago, downed Colonia High School, 38-33. North Brunswick was clinging to a 23-22 lead after three quarters, but the Raiders scored 15 points in the final quarter to seal the win. Alex Walker led the way with 17 points and seven rebounds, while Kayla Scher added nine points. Morrell noted that while defense is his team’s hallmark, lack of scoring at times was an issue last season. The coach said he was pleased and encouraged with his team’s showing in the final quarter.

“[East Brunswick has] the size advantage, and they beat us twice last year,” coach Ed Breheny. “We knew we had to use our quickness to increase the pace of the game and make their guys work harder.”

It looked like an upset might happen in Metuchen Dec. 18 when South Brunswick’s boys carried a 26-20 lead into halftime against powerful St. Joseph High School of Metuchen. The Falcons, however, took control in the third thanks to a 19-6 run. Eric Savage and Danesh Thirukumaran had 12 points apiece for the Vikings, who were 14-9 last winter.

On the ice, South Brunswick has struggled through three straight losses after winning its first two games.

A pair of goals by Shjon Stonehill and single tallies by Steven Borke and Tyler Allen, who leads the team with 14 goals, propelled the Vikings to a 4-1 lead after two periods against Old Bridge High School Dec. 18. The Knights rallied to score five unanswered goals over the final 15 minutes, though.

Earlier in the week, the Vikings fell behind Woodbridge High School, 5-0, after two periods. A third-period comeback, which included goals from Allen and Brian Mazur, fell short.

On the lanes, South Brunswick raised its record to 4-2-1 with a 3-1 win over Woodbridge Dec. 17. Alex Sorge turned in a 730 series and Anthony Fama was at 642 pins over the three games.

Sorge leads the team with a 238-pin average and a high series of 730 pins. Fama averages 195 pins, and Tyler Kohutaycz averages 191 pins.

North Brunswick’s girls are coming off of a 2.5-1.5 success against New Brunswick High School Dec. 17. Elizabeth Ruffe led the Raiders with a 529 series and is now averaging 183 pins per game.

With the win, North Brunswick improved to 4-4.