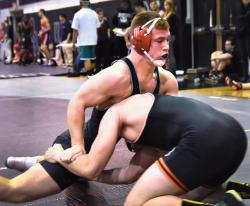 Allentown is off to a 1-1 start and opened its season Dec. 18 with a 67-26 victory over Lawrence High School. In her fourth year starting, guard Kali Hartshorn posted her 1,000th point and finished the game with 17 points, eight assists and six rebounds. Hartshorn reached the milestone midway through the second quarter on a driving layup and also was fouled on the play, converting the free throw for a 28-8 lead.

Forward Dea Pesciotta was the last Redbirds player to reach the 1,000-point mark in 2009.

The Redbirds’ offense features the explosive scoring of sophomore Ryan Weise; the 3-point shooting she brings with teammates Hope Narozniak, a senior, and Sarina Campanella, a junior; and the leadership of Hartshorn, a senior who usual plays point guard.

However, the Redbirds’ strength is their defense.

“Things are going well. We have experience and depth, and we like to have our defense feed our offense. And we run a lot in transition,” coach Linda Weise said. “We have the ability to score from 3-point range and can go inside with Bianca [Santos], Katie [White] and Hadley [Borkowski].”

Santos, a senior, and White and Borkowski, who are both sophomores, all measure around 5 feet 11 inches tall. White scored 14 points in the opener, while Santos had 10.

Santos scored 12 points Dec. 19 as Allentown lost to Life Center Academy, 54-39, in the Trenton Boys and Girls Club Classic in Princeton. Towering center Imani Lewis scored 24 points for the winners, who are 9- 2. Allentown trailed, 22-9, but got no closer than eight points. Campanella chipped in nine points.

“I’m pleased with their effort and not quitting,” coach Weise said, calling Lewis a big difference-maker. “And we struggled a bit to get the ball in the basket.”

Allentown hosted Nottingham High School Dec. 22 and will play Hillsborough High School at 1 p.m. Dec. 28 in the Monroe Christmas Tournament. On Dec. 30, the consolation game of the four-team bracket is at 1 p.m. and the championship game is at 5 p.m.

Allentown returns its top scorers from last season. Ryan Weise, who can play both guard spots, led the team with an average of 14 points per game last season, followed closely by Hartshorn (13 points and three assists a game) and Santos, who dropped in a dozen points per game as she benefitted from good entry passes to start her power moves to the hoop. Narozniak showed the ability to come up with big-scoring games. They often come at significant times and included 12 points off four 3-pointers in Allentown’s 53-35 victory over Ocean Township High School in the NJSIAA Central Jersey Group III quarterfinals last year. The Redbirds lost in the next round to Neptune High School. They also were upset in the Mercer County Tournament semifinals as the No. 2 seed by No. 6-seed Trenton Catholic Academy, which eventually won the title.

The Redbirds are aiming this year to get to both championship games for the first time.

“We know it’s not going to be easy because we’re going to get everyone’s best effort, and we have to be ready,” coach Weise said.

“The key is we have to communicate. We have a lot of talent — a lot of young talent — but the post players are a secret weapon,” said Hartshorn, who is headed next fall to the University of Maryland for lacrosse.

Hartshorn, who also played soccer at Allentown, and said she’d like to get to the Mercer County Tournament finals.

“We always set that goal and to hopefully win the division,” she said.

“We can definitely compete and contend if we work together.”

Seniors Erica Cramer and Camille Flim bring good experience as guards coming off the bench. While Flim is regarded more as a slasher to the basket and Kramer pulls up for reliable jump shots, both also show good passing ability, which coachWeise regards as another strength of the team. White and Borkowski performed strongly enough last season inside that the coach does not have to worry too much if Santos gets into foul trouble. Marin Hartshorn, a sophomore and Kali’s younger sister, also plays forward.

“Katie and Hadley have some experience, and look for them to step up and fill in at forward when needed. And I feel comfortable that Marin can hold her ground,” Weise said.

They look to make up for the graduation losses of forwards Alyssa Lebers, a starter, and Christa Lebers. Lamesha Burgess was a solid role player coming off the bench who also graduated.

Weise said Kali Hartshorn’s experience and savvy make her an extension of the coach on the court.

“She brings the drive and competitiveness to this team,” the coach said.

Weise also spoke of the drive of her daughter, Ryan, who quickly adapted to varsity level basketball as a freshman last season.

Although Ryan Weise was deadly at times beyond the 3-point arc, her coach said she’s not a one-dimensional player.

“She has the ability to get around people to drive and dish, and it’s also her defense — her ability off our half-court trap to get steals,” the coach said.

On the other end, Hartshorn has had the knack to break through traps and zone defenses, which helped her get named to the CVC Coaches first team for the third straight year. Ryan Weise and Santos were second-team selections. Narozniak also earned praise for her play and confidence she has shown during the preseason.

The Redbirds will be put to a major test Jan. 5 against perennial CVC power Notre Dame High School and have another big showdown against Ewing High School later in the month. Both games are at home.

Allentown has a winning attitude on the bench as well from assistant coach Dina Wells, who coached Allentown’s field hockey team to a 16-1-3 season, with its lone loss coming to Moorestown High School, 2- 1, in the Central Jersey Group III finals.

“I think we came out strong in the first game, and in the second game we were out of character a bit and struggled,” coach Jay Graber said. “On offense, we need to be more patient. Against teams like that, every mistake costs you. We need to be a little more disciplined.”

Jordan Rugo at 170 pounds and Zach Turner at 182 won their weight classes as Allentown finished sixth in the team standings at the Ice Breaker Tournament Dec. 19 at Old Bridge High School. Drew Romein at 132 pounds was a consolation winner and Theodoros Vlahos finished fourth at heavyweight.

“For the first tournament, they did some very good things,” said new coach Mitch Nock. “But there are some things we have to build on.”

The Redbirds had a dual meet Dec. 23 at Hightstown and compete in the Hawk Classic Dec. 28 at Manchester Township High School.

Shawn Camisa and Josh Rosenbaum added goals for the Ravens (7-2) in the second period, and Nick Koch made a dozen save in goal. Lawrence is 2-5-1.