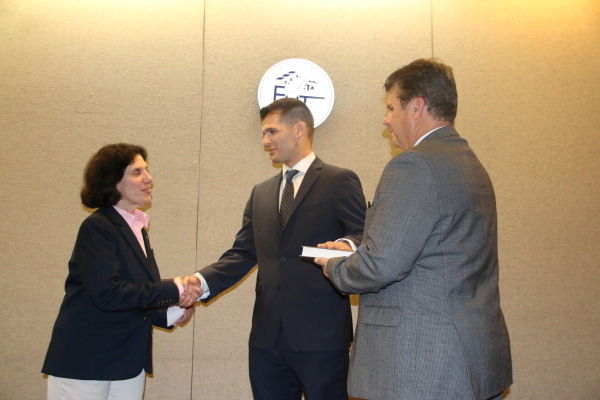 By Amy Batista, Special Writer
EAST WINDSOR – Township officials welcomed a new police officer to the ranks with the swearing-in of Karl Johnston III during its meeting on Dec. 22.
Mayor Janice Mironov administered the oath of office to Officer Johnston, with his father, Karl Johnston Jr., by his side. Fellow officers, family and friends were in attendance to support him.
The mayor said Officer Johnston would be filling an open position in the East Windsor Township Police Department.
“He is coming on as a probationary officer in the uniformed services division,” she said.
Officer Johnston graduated from the Mercer County Police Academy in July 2015. A 2006 graduate from the Peddie School, he obtained his bachelor of arts degree in English from Rider University n August 2011 and has also attended Midland University pursuing a graduate’s degree in education.
“It is an honor to get through what is a very rigorous vetting process within the police department that has been set up to try and get the best, brightest, most caring and most capable police officers,” said Mayor Mironov. “I congratulate you on your selection and getting through that process and having the opportunity to join what is really an outstanding police department under the leadership of our Chief Harry Marshall. I’m sure that you are going to find it a really satisfactory and very successful career for yourself.”
Chief Marshall thanked the members of council for taking the time before their meeting to swear in the department’s newest officer.
“Karl, each of the officers who are here tonight, each of them have stood where you are standing today,” he said. “We realize how special this is for you and we are happy that your family could be here and be part of it.”
Chief Marshall reiterated that the new officer is joining a team of police officers who are highly skilled and dedicated to serving the residents of the community of East Windsor.
“We are happy to have you are part of that team,” he said. “On behalf of all the officers here and the entire police department, congratulations.”