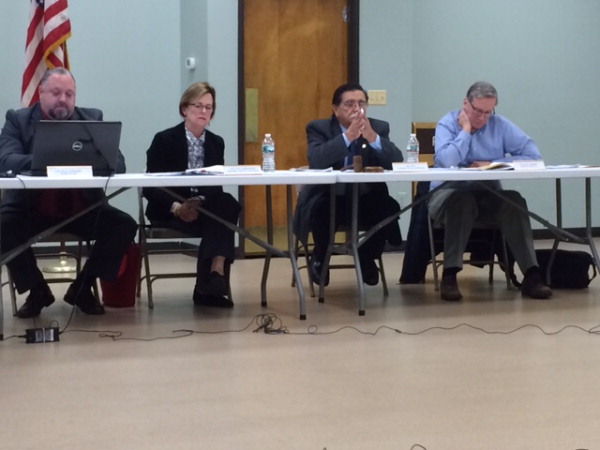 By Amy Batista, Special Writer
HIGHTSTOWN – Residents and council took some time to look back and reflect on this past year during its meeting on Dec. 21.
“I decided to weigh all the good things and bad things that have happened in the last year,” said resident Eugene Sarafin. “I couldn’t find anything bad you did the whole year, which is nice.”
He said it was a pleasure to have a year in which the council accomplished a lot of things.
“I love and appreciate everything that has taken place this year,” said resident Scott Caster. “What you’ve accomplished. I’ve appreciated the way, in the beginning of the year, you set out a number of goals. They were lofty goals, you shared them with everybody, the public, and I’ve believed that everybody has reached for those stars. You’ve not hit all the targets but you’ve gone further than most council have gone.”
Mr. Caster said he “just wanted to add more to it” as he brought up property taxes, Rug Mill property, and the downtown lakefront vision.
“I would like next year to tackle a small agenda in the face of your bigger agenda because I think that’s the only way we will see your mission accomplished long-term into survival,” he said.
Resident Frank Rivera talked about partnering more in the new year.
“We need to talk to each other perhaps a little more,” he said.
He acknowledged the partners in the borough, including Rise and Peddie School.
“We’ve made promises to each other,” he said, referring to the Hightstown Cultural Arts Commission.
Mr. Rivera also referred to a previous comment made by Mayor Larry Quattrone who said that a home was needed for the arts commission.
Mayor Quattrone said he would find a home for the arts commission.
Charles “Lee” Stults thanked his fellow council members.
“It’s been one hell of a year,” he said. “It’s been more than I imagined. It’s been a lot of work but it’s been a lot more rewarding than I could have ever thought.”
Mr. Stults also thanked the public.
“There’s been a level of respect,” he said. “It’s been heated at times but it’s been respectful. I thank everybody who has taken the time to come and listen to us and contribute,” he said,
Council member Steven Misiura said it has been a good year working with this council. “I look forward to doing some great things next year,” he said.
Council President Denise “Denny” Hansen agreed it has been a good year.
“I look forward to another good year next year,” she said. “I think the biggest takeaway I have this year is just when there is a lot of work going into everything that we are doing. I think that we have to try to start to prioritize how we are doing some of those things and making sure we are hitting what our priority and goals are and not spending too much time on or delegating more to other people.”
Mayor Quattrone said the elected officials would set more goals in 2016.
“I look forward to working with Downtown Hightstown,” he said.
He said he is working with (borough administrator) Henry Underhill on a lot of issues that have come about during the year.
“They are coming together for us, for Hightstown, for the betterment of Hightstown,” he said.