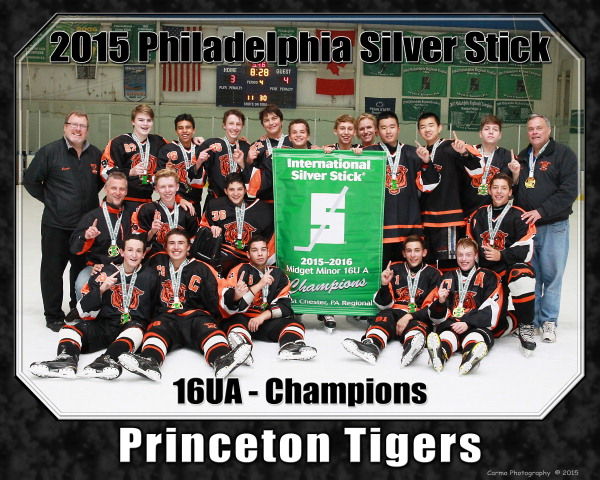 The Princeton Youth Hockey Association U-16A team is bound for Canada to play in a tournament in mid-January.
The team of 18 skaters and two goalies is a mix of players from various towns. Two players are from Hillsborough and one is from Neshanic Station.
At the start of the season the Tigers weren’t expected to do very well — maybe achieving a .500 win percentage, said assistant coach Blaine Banfitch — but it ended the regular season with an overall record of 25-2-2.
The boys compiled a N.J. Youth Hockey League record of 19-1-2, which allows them to compete in the March playoffs with the opportunity to advance to districts.
The highlight of the Tigers’ season was winning the Silversticks Philadelphia regional, which entitles the team to compete in the international championships in Ontario, Canada, on Martin Luther King Jr.’s Birthday weekend.
The Silversticks competition in mid-September consisted of six games. Winning the first two of three (one was a 1-0 loss) qualified the team to continue that weekend in the tournament playoffs.
In the first round of the playoffs, the Tigers came from behind against the Old Bridge Knights. Down, 3-2, going into the third period, Princeton scored three goals to ring up a 5-3 victory.
In the semifinals the Tigers faced off against the Long Island Edge, which was in fact an AA team. Despite being handily outshot, the Tigers were only down 1-0 with less than 2 minutes remaining when they tied it up and forced overtime. After a near-goal seconds into overtime by Princeton’s Jake Sanciewicz, the puck was pinned in the Tigers’ defensive end. A mad scramble in the crease occurred. A Tiger defenseman covered the puck with his hand in the crease, resulting in an automatic penalty shot.
The Edge picked their best player who faked and tried to beat the goalie to the left side, but was stopped with a right pad deflection on the goal line.
Shortly after the penalty shot, Jake Sanciewicz beat the Edge goalie to earn the Tigers a spot in the finals.
The sixth and final game of the weekend resulted in another come-from-behind victory, this once against the hometown Quakers. Once again, Princeton was down late in the third period, tied it with under two minutes remaining and won two minutes into overtime, 4-3, on a rebound goal by Dante Aralihalli.
That weekend the Tigers allowed only 11 goals in 6 games and had three come-from-behind playoff wins, two of which were in overtime and one of them after stopping a penalty shot in overtime.
This was the first-ever victory for any PYHA team at this tournament in PYHA’s 50-plus years.
A little team info: Team captains are Tyler Birch, Jacob Sanciewicz and Nick Aubry. Goalies are Nolan Banfitch, who played all six games at Silver Sticks and all but one game the rest of the year) and Madeline Birch, who joined the team late season.
Head coach Mike Bendorf was assisted by Blaine Banfitch, Phil Aubry, Ian McNally and Frank Senkiewicz, with manager Frank Bason.
Nolan Banfitch and Frank Bason are Hillsborough residents. Nolan, a junior, is playing high school hockey for Saint Joe’s Metuchen with Jacob Sanciewicz (a junior from Neshanic Station). Frank Bason, a sophomore, is attending Hillsborough High School.
Nolan had a .934 save percentage in league play this year with less then a goal a game allowed. He had his first high school varsity start this year versus state champion Christian Brothers Academy.
“These boys worked hard and bought into what they were being taught and played an unselfish brand of hockey, which paid off amazingly for them,” said Mr. Banfitch. “We had a young defensive core, which was second best in the league in goals allowed (39) but still found ways to contribute offensively. They never got down on each other when bad things happened. They stuck together and showed how great it can be to play this game if you’re willing to do the right things as a team.”
On the team are Vincent Zhang of Bridgewater; Max Garlock and Wei Wu of Princeton; Paul Tedeschi, Alex Advani and Dante Aralihali of Belle Mead; Joe Caputo and Luke O’Shea of Monmouth Junction; Chandler Habig, Logan Harris and Matthew Farley of Skillman; Nick Aubry of Annandale, Nolan Banfitch and Frank Bason of Hillsborough, Madeline Birch and Tyler Birch of Plainsboro, Erik Szanto of Whitehouse Station, Jake Senkewicz of Neshanic Station, Nick Bianca of Manalapan and Paul Argiriou of Cranbury. 