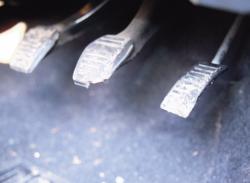 Your next car could apply the brakes on its own to help avoid a collision Perhaps as the first step toward driverless cars, expect advanced safety systems that can help drivers avoid, or at least lessen the effects of a crash to become widespread in the not-too-distant future.

Ten automakers recently committed to making the potentially life saving systems standard in all their vehicles sold in the U.S., presumably over the next few model years. They include Audi, BMW, Ford, General Motors, Mazda, Mercedes- Benz, Tesla, Toyota, Volkswagen and Volvo. Together, these companies were responsible for 57 percent of U.S. light-duty vehicle sales in 2014.

Other automakers could follow suit, and has been the case with important safety features like antilock brakes and electronic stability control, there’s a possibility frontal crash protection could one day be mandated for use in all cars by the federal government.

Until recently limited to the luxury car segment, frontal crashavoidance systems are fast becoming prevalent among more affordable cars and crossovers, though they’re usually offered only on costlier versions within a given car line, and are often bundled with other features in expensive options packages.

A forward collision warning/prevention system uses radar, cameras or lasers to monitor the distance between a vehicle and the traffic or other obstructions in its path. The same hardware is also used in a vehicle’s adaptive cruise control system that maintains both a set speed and distance from the traffic ahead. Basic systems will engage visual and audible alerts if it determines the car is closing in at a potentially hazardous rate of speed and pre-charge the brakes to maximize their stopping power. A full-blown collision avoidance system will go a step further and automatically apply the brakes at full force if the driver isn’t reacting quickly enough.

Most such systems operate at higher speeds with the intent of saving lives, though a few models, specifically those from Volvo and Mazda, are also selling separate auto-braking systems that operate at slower speeds to avoid fender benders in stop-and-go traffic. A few Infiniti models further offer lowspeed systems that will automatically apply the brakes while backing up to avoid hitting pedestrians and other vehicles.

According to a report conducted by the Insurance Institute for Highway Safety in Arlington, Va., autobraking technology can reduce insurance injury claims by as much as 35 percent. “The evidence is mounting that AEB is making a difference,” says IIHS’ president Adrian Lund. “Most crashes involve driver error. This technology can compensate for the mistakes every driver makes because the systems are always on alert, monitoring the road ahead and never getting tired or distracted.”

In order for a vehicle to earn IIHS’s highest Top Safety Pick+ designation, it must offer an automatic braking system in one or more of its versions. Vehicles earning a “superior” rating are able to successfully avoid a crash or substantially reduce a vehicle’s speed in tests conducted at 12 and 25 mph. To garner an “advanced” rating a vehicle must include an autobraking function and be able to avoid a crash or reduce speeds by at least 5 mph in either of the two tests. Forward collision warning systems that meet performance criteria set by the National Highway Traffic Safety Administration and autobrake systems that provide only minimal speed reduction in IIHS tests earn a “basic” rating.

As of this writing, the IIHS has given a record number of models a “superior” rating for forward crash avoidance when properly equipped, including the 2016 Acura ILX, MDX, RDX and RLX; 2016 BMW X3; 2015 Chrysler 300 and its twin, the 2015 Dodge Charger; 2016 Honda Accord Coupe and Sedan, 2015 Mercedes-Benz C-Class, CLA and E-Class; and the 2016 Mazda 6 and CX-5. The 2016 Volkswagen Golf, Golf SportWagen, Jetta and 2015 Volkswagen Touareg are deemed “advanced” for front crash prevention.