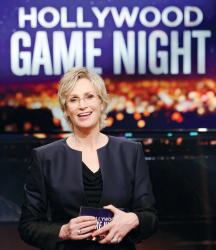 Jane Lynch PHOTO COURTESY OF NBCUniversal NBC’s popular party-time series, “Hollywood Game Night,” is set to return for its fourth season on Tuesday, Jan. 5, at 8 p.m. Jane Lynch, who has won the Emmy Award two years in a row as outstanding host of a reality or reality-competition program, will once again lead the on-screen festivities. A slew of high-profile actors, athletes and recording stars will participate in the fun as they compete in hilarious party games. Two contestants are transported from their everyday lives into this once-in-a-lifetime night of fun and compete for a chance to win up to $25,000.

Ben Higgins will begin his search for that one special woman when ABC’s hit romance reality series, “The Bachelor,” returns for its 20th season on Monday, Jan. 4, at 8 p.m. What do a single mom with two young daughters, a television news anchor, a free spirit, a battle-tested war veteran and fun-loving identical twins have in common. They are all among 28 identified bachelorettes who look to capture

Ben’s heart. One by one, these gorgeous women are prepared to make a lasting impression.

The sweetest competition returns to Food Network when the new season of “Cake Wars” premieres on Monday, Jan. 11, at 9 p.m. Four bakers battle it out to create the most mind-blowing cake to star at a special event, along with a chance to take home the grand prize of $10,000. Jonathan Bennett (“Mean Girls”) is the host, and master pastry chefs Ron Ben-Israel and Waylynn Lucas will serve as judges, along with a special guest judge.

HBO will debut its concert film, “J. Cole Forest Hill Drive: Homecoming,” on Saturday, Jan. 9, at 10 p.m. One of music’s biggest stars returns home to Fayetteville, N.C., delivering a riveting performance that showcases live versions of all 13 songs on his third album. Also included are guest appearances by Jay Z and Drake.