Skip to content
(the guy who is committed to keeping the rated-G in TV)
By Lori Acken,
www.channelguidemag.com 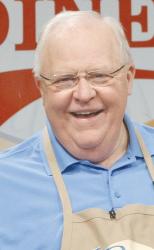 Larry Black It’s near impossible to tune in to RFDTV’s Larry’s Country Diner and not want to climb through the screen to share some pie and sociability with host Larry Black and his cast of amiable characters as they crack wise, reminisce about classic moments in music and TV and generally have a fine time. The 70-year-old, Alabamaborn preacher’s son turned his love of music and rich baritone voice into a decades-long career as a disc jockey — during its heyday, the Larry Black Show aired on 125 radio stations across the country. Acting gigs followed on I’ll Fly Away and In the Heat of the Night and in feature films such as Ernest Goes to Camp and October Sky. Now Nashville-based, Black also serves as producer of the downhome Diner and its equally nostalgic companion series Country’s Family Reunion that give folks longing for the homespun days of Hee Haw new options. We caught up with Black to talk about keeping the rated- G in TV. Country’s Family Reunion was your first TV venture — how did that come to be?

I was doing a project with [the Gaither Homecoming series’] Bill Gaither — a comedy album that he was producing for me — and when we finished the album, we were having dinner at Amerigo’s here in Nashville. I said to him, “What you’re doing with the Southern gospel people, we ought to do with the country beat.” This was in 1997, just before it just all broke loose for Gaither with the Homecoming gatherings that he does. He said, “I’m too busy,” so I said, “Then I’ll do it.” We got together 30 people and put them in a room. Of those 30 people, about 18 have now died. So what we really created was a piece of video history and remembrance. Grandpa Jones. Johnny Russell. Little Jimmy Dickens. It has been a real jewel — and we’ve continued to do them. And Reunion begat Larry’s Country Diner?

Once we hit RFD-TV, I realized what the audience was and that Ralph Emery was no longer going to do his TNN show. So I thought this was a perfect time to do a different kind of talk and variety show. But I don’t like sitting in front of fireplaces to do interviews, or across couches or a desk. So, “Hmm, we’ll do a little Podunksville diner, and every day at lunchtime the local cable company — because they have nothing better to do — brings some cameras into the diner to shoot the people having lunch. The sheriff in town [played by National Musicians Hall of Famer Jimmy Capps] just happens to be a world-class guitar player, so he’ll pull up and bring his guitar in, and if anybody drops by and wants to sing, they can sing and he’ll play the guitar for them!” Nadine is your breakout star.

Every small town has the town gossip. I’d gone to church with Nadine for about 17 years — Ramona Brown is her real name — and she did this little character for a Valentine’s party one time. So I went to her and I said, “Why don’t you go online and get the church bulletins that are all screwy, and you come in and do that? You can mess with people all you want as the church lady.” So she did that, and that character has just really blossomed. Her husband is an optometrist and she’s worked for him all of their married life. Now she goes out on weekends and will do 45 minutes worth of standup. How do you choose your guests?

While we have the Larry Gatlins and the Vince Gills, Randy Owen of Alabama, there are other artists — Gene Watson, Moe Bandy, Jimmy Fortune — those guys say the shows just totally revived their careers, and have given them a new lease on life in terms of touring. I want to reach out, and help more artists who don’t get airplay anymore because they don’t have labels, but they still produce product. They just don’t have a way to get it to the marketplace. Describe your audience.

Because we deal with a more mature audience, they introduce us to their kids, and to their grandkids. Then the kids and grandkids become fans. Also, we find that when we go to Branson, oftentimes there are young adults who bring their parents because they know their parents want to come see the show live, and they have become fans also. Our viewing audience is getting younger because they’ve experienced the same thing. That’s a rarity.

That’s a joy. Bill Medley, one of The Righteous Brothers, lives in Branson and performs there as well as Vegas, and he said, “It’s so funny. You perform in Branson and you see these bus loads come in and you watch the old people get out of the bus … with their parents.” I thought, that is so true, man! You have these 60- year-old people getting off the bus with their 85-year-old parents!