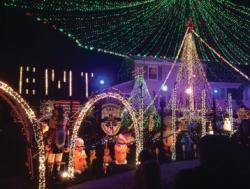 Paying tribute to Hinal Patel, the Spotswood EMT who was killed while on duty in July, Kloos Family Lights incorporated a Spotswood EMS badge into their Christmas lights display. The Kloos family will also be accepting donations that will go toward a scholarship to be awarded in Patel’s honor to a graduating Spotswood High School senior. MICHAEL NUNES/STAFF EAST BRUNSWICK — For this year’s Christmas display at Kloos Family Lights, a badge honoring fallen Spotswood EMT Hinal Patel was the focal point of the display.

“Every year we choose a different charity to donate to. … We really like doing a cause that is close to home. So this is why we went with Hinal this year because we wanted the money to benefit something close to home and see the results of what we do,” said Billy Kloos, who along with his brother Ryan has been setting up elaborate Christmas light displays.

Patel, 22, of Piscataway, was killed when her ambulance, while en route to an emergency call, was struck by a motor vehicle on July 25, causing the ambulance to turn over. The accident occurred at the intersection of Cranbury Road and Ryders Lane.

“This is actually a great honor because this shows she was well loved and well respected,” said Miriam Barbarise, director of Spotswood EMS.

The Kloos family also collected donations, which will fund a scholarship for a Spotswood High School senior who plans on pursuing a career in the medical field, just as Patel had dreamed of going to medical school.

The recipient of the scholarship will be chosen by a special committee and awarded during the Spotswood Public Schools’ Senior Awards Night.

“To do this to help someone achieve what she had planned on achieving, I think it’s an honor. … For them to choose my Hinal is pretty cool,” Barbarise said.

For Spotswood Mayor Nicholas Poliseno, this scholarship is a way of keeping Patel’s memory alive.

“I am so excited to honor Hinal and to keep her memory going,” he said, adding that he hopes to keep the scholarship going for years to come.

“We’re hoping to get 10 years out of this at least and get more people to start donating to this fund so we can keep her name going,” said Poliseno.

In the past, the Kloos family has used the light show to spotlight charities such as Elijah’s Promise Kitchen in East Brunswick, The Make a Wish Foundation, and New Jersey’s Hurricane Sandy Relief Fund.

According to Kloos, over the past six years they have raised $28,000.

Last year, Kloos Family Lights raised around $14,000 in honor of Mikey Nichols, the Monroe Township student who became paralyzed when he shattered his C-5 vertebra during an ice hockey game.

According to Kloos, it took 225,000 lights, 1,500 strands and five miles of extension cords to make their display possible.

“I am so proud of both of my sons for doing this,” said Bill Kloos, father of Billy and Ryan. Kloos is a retired North Brunswick police lieutenant.

According to Kloos, the badge honoring Patel will be used in future displays.

Those who wish to donate can do so at gofundme.com/spotswoodems.