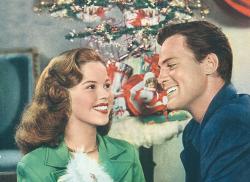 Child star Shirley Temple and John Agar were happy newlyweds at Christmastime in 1945. The Puritans banned it. Our Founding Fathers weren’t too crazy about it. And Congress didn’t get around to making it an official celebration until 1870.

But you’d hardly guess it as Christmas approached. We Americans love our holiday and its traditions, most of which we take for granted and some of which emerged from the World War II era and years immediately following.

Take early shopping. Sure, it’s a way to avoid overcrowded malls and the fruitless search for parking, but in wartime, getting packages to soldiers in the Pacific by December was the main priority. Of course, gifts closer to home need a tree, no matter what it’s made of — or even what color. Futuristic aluminum models, sometimes in purple, gold, pink and black, made an appearance in postwar home décor, although their popularity took a hit after being satirized in 1965’s A Charlie Brown Christmas. A decade later, the “back to nature” movement helped restore the real thing to favor.

Americans send over a billion Christmas cards each year, and the first such White House missive debuted in 1953. President Dwight D. Eisenhower, an amateur artist, worked personally with the head of Hallmark cards, and many of the cards sent during his office term featured his artwork. Though war-weary Americans at first preferred sentimental messages, by the 1960s, cards had taken on a more sophisticated and humorous bent, sometimes featuring elves with Beatle-inspired haircuts or Santas driving convertibles.

Gifts purchased, tree decorated and cards sent, filling our stomachs is the next priority. Would it really be Christmas without green bean casserole, created by the Campbell Soup Company as part of a promotion? Or a casual get-together without Chex Mix, said to have become a favorite when the wife of a Ralston Purina executive served it at a 1955 holiday function?

Once the goodies have been consumed, it’s time to follow Santa’s journey via the NORAD Tracks Santa service, for which we can thank a 1955 advertising error encouraging kids to call Santa Claus on a special telephone number. No doubt Col. Harry Shoup, of the Continental Air Defense, was dumbfounded to receive inquiries about the jolly old elf’s whereabouts that Christmas Eve, but, good sport that he was, he instructed his operators to give Santa’s current location to any child who called in. Three years later the North American Aerospace Defense Command (NORAD) was formed, and the NORAD Tracks Santa service continues to this day.

Finally, let’s not forget our holiday soundtrack. Whether you’re bopping to “Jingle Bell Rock” or warbling “White Christmas” this month, truer words were hardly spoken than Rolling Stone magazine’s “What Jesus is to Christmas, Bing Crosby is to Christmas music.” The Irish crooner’s version of the Irving Berlin classic, ranked by Guinness as the best-selling single of all time, still brings a lump to our throats, at home or abroad.

Whatever traditions are on tap at your home this year, may they be filled with the best things the season stands for: peace, love and joy.