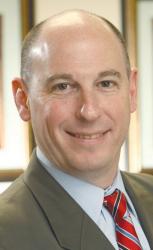 Cantor, 49, works as a health care consultant and has served on the Marlboro Township Council since 2004. Cantor will seek the Democratic nomination in June 2016 for the right to run in November. The sheriff’s position carries a three-year term.

According to the Monmouth County Directory, the sheriff is the chief executive officer of an agency with 600 employees and a $68 million budget which consists of four divisions: law enforcement, communications, special operations and corrections, as well as the administration of the Monmouth County Police Academy and the Office of Emergency Management.

As a councilman, Cantor has served as the liaison to the police department and as a member of the Emergency Planning Council. He is a licensed emergency medical technician and has been a member of the Marlboro First Aid Squad since 1996.

“When I joined the Army in 1985 as a Private First Class, I did it with one thought in mind and that was to serve my country,” Cantor said. “Thirty years later, I am entering this race with the same mindset. I simply want to serve county residents during difficult times.

“My experiences both at home and abroad have provided me with the unique perspective of someone who has established efficiencies to save taxpayers money, worked on responsible budgets and also helped establish governments and spearhead reconstruction and development in some of the world’s most dangerous environments.

“I am looking forward to the opportunity to speak with voters to let them know how all of those experiences make me the most qualified candidate to keep families across the county safe as their sheriff,” he said.

“Jeff is an extraordinary candidate,” Monmouth County Democratic Chairman Vin Gopal said. “He is a colonel and has spent over 30 years serving our country. He is probably the most qualified candidate we have seen for Monmouth County sheriff in quite some time. In the age of growing heroin and drug usage in Monmouth County, I cannot think of somebody who is more qualified than Jeff Cantor.”

Cantor said he is concerned about the safety and security of all county residents.

“I have just returned from a two-month deployment in Europe where we were tasked with ways to help our European allies deal with the (Syrian) refugee crisis and help combat foreign fighter flow with the migrants,” he said. “As a civil affairs officer, one of my mandates is protecting civilians around the globe. It is something I take very seriously and thoroughly believe in. … I have never played partisan politics while on the Marlboro council, nor will I ever do so. … If I can get Sunni, Shia, Kurds and Turkomen to work together, I can certainly get Democrats and Republicans to work together for a common cause.”

Republican Shaun Golden is the current Monmouth County sheriff. He was named acting sheriff in January 2010. Golden was elected to a three-year term in November 2010 and re-elected in 2013. He is a former member of the Colts Neck and Toms River police departments. Golden also serves as the elected chairman of the Monmouth County Republican Committee.