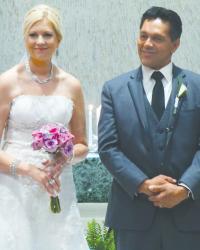 Annmarie, a graduate of Cedar Ridge High School, Old Bridge, has an associate’s degree in business management from Middlesex County College, Edison. She is employed as an administrative assistant at Rue Insurance, Hazlet.

Luis, a graduate of Sayreville War Memorial High School, Parlin, is employed as a trackman with Amtrak, New York.

The bride was given in marriage by Arthur Campbell.

The matron of honor was Wanda Shirley. Bridesmaids were Roberta Yanko, Lilly Lambert and Lynda Bronzellino.

The best man was Russ Shirley. Groomsmen were Arthur Campbell, Brent Lambert and Richard Bronzellino. A reception was held at Ria Mar, South River. The couple spent their honeymoon on a cruise to Bermuda and now reside in Keyport.