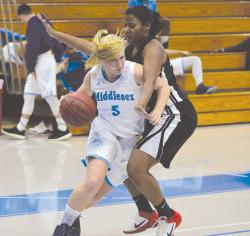 Middlesex County College’s Brittany Clayton, left, dribbles around the Community College of Philadelphia’s Saviare Gilliam during a recent game in Edison. The Middlesex women’s basketball team is having a great season. The women are 12-1 overall and in first place in the Garden State Athletic Conference and Region 19. SCOTT FRIEDMAN After dropping three games in a row, South Brunswick High School’s ice hockey team reeled off a pair of impressive victories before running into Hunterdon Central Regional High School Dec. 27 in the second round of the Protec Ponds High School Holiday Tournament in Somerset.

After falling to Old Bridge High School, 6-4, Dec. 18 in a match the Vikings led, 4- 1, after two periods, things were beginning to look dim for South Brunswick. The team returned to the ice Dec. 23 at home against Montgomery High School and after two periods, the Vikings were looking up from a 2-0 deficit. First-year coach Sergei Starikov’s team rallied in the third on goals by Sean Bocknack, Steven Borke and Tyler Allen, who also had a pair of assists, to pull out a 3-2 victory. Freshman netminder Clayton Romanok made 40 saves in the win.

“We were only down, 2-0, and I told them they could come back,” said Starikov, a former player for the New Jersey Devils. “They came out and took the game in the third.”

The Vikings picked up where they left off Dec. 26, downing Bernards High School, 8-2, in the first round of the Protec tournament. Allen turned in a stellar performance, netting four goals and adding a trio of assists. The senior forward leads the team in scoring with 18 goals and 10 assists.

Sophomore Mason Jenne picked up two goals and five assists, and Borke also had five assists in the win. Jenne now has six goals to go along with 16 assists, while Borke has tallied five goals and nine assists. Despite all the South Brunswick scoring, Bernards fired 50 shots on Romanok, who made 48 saves.

On Dec. 27, Hunterdon Central jumped out to a 1-0 lead and was able to extend it to 4-1 after two periods en route to a 7-1 victory. Allen scored the lone Vikings goal on a power play.

South Brunswick (4-4) was scheduled to return to action Dec. 29 against Bridgewater Raritan High School in the consolation round of the Protec tournament Starikov’s team resumes the regular season Jan. 6 at Jefferson Township High School.

North Brunswick’s boys stand at 1-2 following a 67-53 loss to Piscataway Township High School Dec. 22. Francis Omowole led the Raiders with 18 points, and Adryan Salazar also hit double figures with 11 points. The Raiders were scheduled to take the floor Dec. 29 against Hunterdon Central in the Hillsborough Classic.