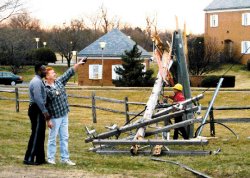 Freehold Township police examine the damage done to a utility pole after a car carrier got tangled in a low-hanging wire.

southbound car carrier loaded with automobiles for delivery brought rush hour traffic to a standstill after snagging a power wire hanging across Route 9 and snapping a utility pole in Freehold Township.

Friday evening traffic came to a stop and backed up several miles into Manalapan as rush hour commuters made their way home.

The accident occurred at 4:47 p.m. in front of Fleet Bank and across from the Freehold Mall shopping center, according to Sgt. Daniel Shea of the Freehold Township Police De-partment.

"It was a motor vehicle accident which closed Route 9 until 9:13 p.m.," Shea said. "There was a low-hanging wire, and it caught one of the cars (on top of the carrier) and it pulled all the wires down."

The car carrier is owned by a company called McMillan in Rockaway, according to Shea, who said the accident caused power outages in the vicinity. 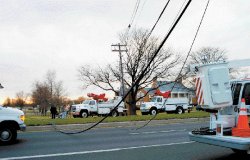 PHOTOS BY JERRY WOLKOWITZ
Wires lay across Route 9, Freehold Township, Friday evening after being pulled down by a car carrier. Traffic was snarled for almost five hours as emergency services personnel worked to repair the damage.