A view from the top of the Court Jester, Main Street, Freehold Borough, shows the newly reconfigured Market Yard parking lot and a new office building that will house the Monmouth County Clerk’s Office. Borough officials are conducting a traffic study of major thoroughfares and parking facilities in town to identify current needs and uses.

FREEHOLD — The ongoing renaissance and shift of government operations in the county seat in recent years may have caused traffic patterns and needs in the town’s public parking facilities to change as well.

These changes, as well as special events such as summer concerts and Kruise Nites, have caused huge throngs of people to pour into town on certain days.

A traffic study authorized and funded by Freehold Borough, Monmouth County and the Freehold Center Partnership has been designed to identify the current needs and uses of public parking in the borough, as well as changes in the traffic patterns on the major thoroughfares leading into town, according to Joseph B. Bellina, the borough’s administrator.

The traffic analysis, to be conducted by Abbington Associates, Freehold Township, will cost $23,000.

"This is a follow-up on a similar study that was done in 1989," Bellina said.

Various physical improvements have been made to some of the parking facilities in recent years.

A major restructuring was undertaken at the Market Yard in late 1999, including repaving and restructuring the parking lot. Some final touches are expected to be completed at that facility in the near future, according to Bellina. 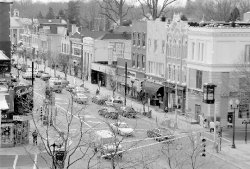 JERRY WOLKOWITZ The intersection of Main, Court and South streets is one of the areas being looked at during a traffic study of Freehold Borough.

The borough has reapplied for state aid to help complete a walkway which was built along the rear of the businesses which front on West Main Street, Bellina said. This would include placing bricks in the walkway.

Part of the cleanup of the Market Yard will also include the installation of decorative lighting, Bellina said.

Bellina said meetings with the Borough Council, Mayor Michael Wilson and the partnership have led to a plan for time limits for the Market Yard’s parking spaces.

"We expect to introduce an ordinance soon codifying the parking spaces in the Market Yard," Bellina said.

The Broad Street-Court Street parking lot was completely restructured and restriped in the mid-1990s.

The Triangle parking lot was constructed in 1985.

Jayne Carr, the partnership’s business advocate, said the move of county employees from one location to another has caused a rethinking of parking plans for the near future.

"There has been a massive shift of existing county employees to the new office buildings on Mechanic Street bordering the Market Yard," Carr said. "The county probation office is already operating out of one of the buildings, while the clerk’s office is expected to move into the second building in the near future.

"This shift will have an impact on parking in the borough, especially in the Market Yard," Carr said. "We have to come up with a new game plan for our parking facilities. We need to have an idea of where people are coming from and where they are going in our downtown area."

Bellina said the traffic study could take from 60 to 90 days.

"We have to know how long people are staying in town and what they are using the parking for — retail, office or restaurants."