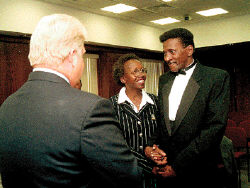 Elaine Porter and Malcolm Murray Jr. were married Tuesday by the bridegroom’s former high school classmate, Red Bank Mayor Edward J. McKenna Jr. For the mayor, weddings are a regular, and enjoyable, part of the job.

There is an endless gauntlet of thankless tasks associated with being an elected official, especially a mayor. Your phone never stops ringing with complaints from constituents about everything from the quality of the road repairs to invading space aliens disrupting television reception. You must deal with budgets, and ordinances, and resolutions … oh my. And the worst, of course, you have to deal with other politicians.

But Edward J. McKenna Jr., Red Bank’s 11-year mayor, would contend he revels in it all. And the one perk of the job that especially brings a twinkle to his Irish eyes is presiding over weddings.

"It’s one of the best parts of the job," McKenna acknowledged.

During his terms in office McKenna has officiated at more than 500 marriages and maintains it is "something I always enjoyed doing."

"I’ve met the most wonderful people," he said. "And a week doesn’t go by that I don’t run into someone I’ve married."

Most recently, while attending his son’s baseball game, the mayor was approached by the umpire — whom he married.

He conducts the civil ceremony, usually in borough hall prior to the council meetings, but he has married people in his office, at homes and at hotels.

But he tries to refrain from tying the knots on the weekends, because it could easily become too much of an intrusion on his personal life.

The people who come to him to conduct the service run the gamut from young sweethearts starting out on their life together, to longtime life partners who are renewing their vows. Many of whom, for whatever their reason, have decided not to go the route of a religious ceremony.

For Elaine Porter, the decision to have McKenna orchestrate her nuptials was based partly on economics.

"I can’t afford the real traditional wedding," she said.

But for Malcolm Murray Jr., Porter’s fiancé, another factor in having McKenna help them start their life together was based on nostalgia.

"The mayor and I went to school together and he never would have been picked to play on anybody’s basketball team if I didn’t [pick him]," Murray recalled.

They both work at Blythe House of Tinton Falls, an assisted living facility, and, according to Murray, he has asked Porter to marry him numerous times, but she only recently agreed.

"She finally gave in," he said smiling shyly.

Their wedding went off with only one hitch: There was a delay because some of the wedding party, including the bridegroom’s mother, didn’t arrive on time.

So McKenna conducted the council meeting and then adroitly adjourned the meeting briefly and married the couple without missing a beat.

However, McKenna admits that not all of the ceremonies have gone so smoothly.

There have been instances when people have fainted, and a time when a bridegroom started sobbing uncontrollably and had to be ushered into the office to regain his composure. There was even a time when one individual became so nerve-wracked, there was — how shall we say it? — a nervous "accident."

There also have been occasions when McKenna has conducted three to five weddings at a pop.

And while he is allowed to, McKenna never charges a fee for the service. Instead requests that a donation be made to one of the local charities.

McKenna is one of the two officials who are not members of the clergy who can legally perform weddings. The other is the municipal court judge, William Himelman, who chooses not to because of other obligations.

After the ceremony, the newly married Murrays said they were going to have dinner with a small group of friends, and planned to spend the weekend in Atlantic City for a honeymoon.

Murray said he was glad McKenna was able to conduct the ceremony, considering the mayor’s busy schedule.

"We do talk time to time when we run into each other," Murray said. "He is a good guy."

"If I went to school with the mayor, why not have him marry you," said Maxine Murray, the bridegroom’s sister.

"Nothing wrong with rubbing shoulders with friends," she said.