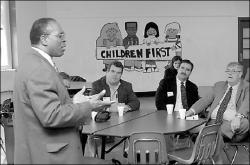 Red Bank Superintendent of Schools Dr. J. Michael Rush will be leaving the district at the end of the month to become state Education Commissioner William Librera’s deputy chief of staff.

RED BANK — Dr. J. Michael Rush, the district’s superintendent of schools, will be leaving that post at the end of the month.

Rush has been hired for the position of deputy chief of staff by state Commissioner of Education William Librera.

In his new position, Rush said he will be assisting the commissioner in six central counties, including Monmouth.

In his new role, Rush said he hoped to be able to position the state’s department in more of a proactive problem-solving stance than is currently the case.

"The state has always been in more of a ‘gotcha’ role," he said.

Rush tendered his resignation at Tuesday’s Board of Education meeting, following an executive session to negotiate an agreement to allow the superintendent out of his current contract.

"What is on the table are the terms and conditions of my resignation," Rush said, prior to the executive session.

Rush had 21/2 years left on his current contract.

Later that evening, board President Rosemarie Kopka declined to elaborate on terms but said the agreement was done in a "mutually agreeable fashion."

"I’m glad we got this settled," Kopka said.

Rush has been with the district for more than five years in a tenure that has been described as productive, and at times stormy.

In that time Rush and the board orchestrated a successful campaign to get voter approval of a $11.3 million referendum to renovate the district’s aging Middle School.

Also during that time the district’s Middle School has seen a turnover of more than 50 percent of its staff, bringing in a younger faculty that officials say has raised the energy level in the school.

There also has been an almost total revision of the school’s curriculum during that time, as well as an added emphasis on technology. Now there are at least two computers in every classroom in the Middle School.

"This is the beginning of a renaissance" in the district, Rush said.

Since coming to the district, Rush said a major priority was to improve the environment in the Middle School, especially in the area of discipline, long a concern in the district.

"I’m proud of the progress we’ve made," Rush said, "not satisfied. You’re never satisfied until you’re the best."

"During his tenure I do think we accomplished a great deal in terms of instruction in the classroom," said board member Mary-Ellen Mess.

Mess pointed to, among other accomplishments, the implementation of a more stringent evaluation process for staff members. But for Mess, Rush’s legacy will be the renovation of the Middle School.

Initially, according to Mess, the board was somewhat apprehensive about pursuing the project, considering concerns over voter support and costs.

The board did decide to move forward, and was able to obtain a 40-percent reimbursement from the state for the project.

"He really insisted we do that," Mess said. "And that building will be there for a long time," he added.

Rush’s tenure, however has not been without its controversies.

Since being with the district, he and the board have waged a battle against establishment of a charter school in the borough. That battle continues with the board opposing the Charter School’s plans to expand for the coming school year.

Rush, however, said this week, "I always said I agreed with charter schools in concept." His and the board’s issues were over the funding formula and the effect the school had on the racial composition of the district, he said.

"The rules and regulations (for charter schools) have to change," Rush said. "Of course, I won’t be making that decision," he added.

Rush was also engaged in a sometimes contentious tug-of-war with some board members last summer, concerning the departure of two administrators and the naming of their replacements.

"There had been issues," Rush said.

Rush’s resignation is effective April 30, and he begins his new position May 1.

Kopka said the board will most likely look to hire an interim superintendent while conducting a comprehensive search for a permanent replacement.

Rush said he would not participate in that process.

He said he is looking forward to his new position.

"I’ve been in education my whole life, coming up through the ranks," he said, noting that this new position is actually an honor.

"We wish Dr. Rush well," Mess said, adding, "I think it’ll be an exciting time ahead."