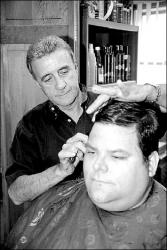 CHRIS KELLY Ron Kroeschel, who works in Shrewsbury, gets a trim from Salvatore Izzo Jr., who has been cutting hair for more than 50 years.

Salvatore Izzo Jr. really means it when he says he worked his way up in his profession.

"I like to say I started at the bottom of the shoe and now I’m at the top of the head," quipped Izzo, who began shining shoes at his father’s Red Bank barber shop while still a young boy.

"I was cutting hair after school at 15 years old while I was a student at Red Bank High School," said Izzo, who recalls a time when barber poles proliferated in the greater Red Bank area.

"Red Bank had 15 barbershops at one time," said the proprietor of Sal’s Barber Shop in Shrewsbury. "Now there are only five, and I’m the only barber in Shrewsbury."

Izzo’s father, Salvatore Sr., was working at Sol’s Barber Shop on Monmouth Street when his grandfather came to the area for a visit and decided to stay. He bought a house in Red Bank and decided to open his own shop on Shrewsbury Avenue, and Izzo’s father went to the local bank for financing.

"Dad went to First Merchants Bank in Red Bank to see Mr. McQueen, the head of the bank," Izzo recounted. "He was only 17 years old, and he said he wanted to borrow $300. McQueen said, ‘You have a lot of spunk, and I’m going to give you the money.’ So my grandfather and father opened Sal’s Barbershop on Shrewsbury Avenue on Sept. 15, 1927."

The shop remained at that location until 1970, when Salvatore Sr. moved it to the present location at 207 Patterson Ave.

Izzo, of course, grew up around the shop, where he began sweeping the floor — and watching his dad cut hair — when he was just 8 years old.

"I watched him cut hair for seven years," recounted Izzo. "Then one day he asked me if I thought I could cut hair, and when I said yes, he told me to go get my younger brother."

That haircut went well, and Izzo began cutting hair after school, mostly for schoolmates. Back then, a haircut cost 90 cents.

He decided to strike out on his own in 1963 and opened Sal Jr.’s Hair Stylist on Route 35 in Middletown. Being on his own gave Izzo a chance to do his own thing, and he branched out into popular styling techniques like razor cutting, hair coloring and hair replacement.

"I wanted to do more than just cut hair; I wanted to do styling" he explained. "That’s why a lot of guys went out of business when long hair came into fashion. But I had learned to cut women’s hair from my dad."

Izzo moved over to his brother’s barbershop in Little Silver in 1983 (he has a sister who is also a haircutter) before rejoining his father at the Patterson Avenue shop in 1990.

"Dad was 79 years old at the time and working every day," he said.

Salvatore Sr. was a beloved figure who had a loyal following, Izzo said.

"He was so respected, and people have so many stories about him," Izzo said of his father, who was a captain of the Shrewsbury Fire Police. "Tears come to some people’s eyes when they look at his picture."

The two worked side by side until 1995, when the elder Izzo passed away at the age of 84.

Dedication to their customers earned both Izzos a loyal following.

"I have customers in their 70s who got their first haircuts here and never went anywhere else," said Izzo, who noted he has never missed a day of work in 53 years. "Some of these guys, I’ve been cutting their hair since they were 2 years old."

Even customers who move out of the area remain loyal.

"I have one guy whose hair I’ve been cutting for 30 years," he said. "He moved to Delaware and tried a barber there, but he wasn’t happy, and he still comes once a month to get a haircut. Some people are like that."

Izzo has even managed to be a part of a reunion.

"I had two fellows who are in their 70s who’ve gotten haircuts here since they were little boys. They’re both from Red Bank, are parishioners at St. Anthony’s Church and live on different sides of Middletown," he recounted. "I was cutting Joe’s hair and up the driveway comes Tony. The last time they saw each other was in 1941. One was going into the Marines and the other was playing football for Red Bank High School, and they hadn’t seen each other since."

Izzo made good on a promise to longtime customer William Siegfreid, whom he affectionately called Uncle Bill. When Siegfreid was 98 years old, Izzo promised him free haircuts.

"‘When you reach 100, you don’t have to pay me anymore,’" Izzo said he told Siegfreid. "So he got five years of free haircuts out of me."

What Izzo relishes most about his more than half-century of haircutting and dispensing advice is the ability to make people feel better about themselves and about life in general.

"Sometimes you get a guy in here and he’s down, but there’s something about a haircut that makes him feel better," he said. "Everybody goes out better than when they came in."

It isn’t all about cutting hair, he noted.

"You get a better education here than in college because you have people who’ve been to the best colleges, who’ve been all over the world and who’ve learned a lot," he explained. "I’m not bragging, but I can talk about anything with anybody.

"You have to be a diplomat, too," he said. "You have to know who’s a Democrat, who’s a Republican, who not to talk to about certain subjects, even what customers not to schedule appointments for at the same time."

Izzo maintains that he has seen styles come and go and come back again.

"I’ve seen it all — long hair and beards, the DA, flat top, Chicago box, the Ivy League, the Elvis look with beefy sideburns, the Mohawk," he said.

Once professionals of a walk-in trade, barbers now work mostly by appointments, Izzo noted. But he said he allots 90 minutes a day to walk-ins to continue to serve longstanding customers.

Haircutting is only part of a barber’s role, Izzo observed.

"People come to me. We laugh, we joke. It’s like coming to visit a friend. You look forward to certain people coming in," he said.

"This isn’t a business anymore, really," he commented. "People coming to the same barbers for 75 years; this closeness with people. I don’t feel like they’re clients anymore. To me, they’re more like friends."

He noted, "I’ve always said it was the greatest gift my father could ever give me."