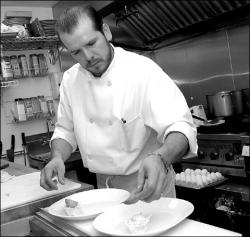 FARRAH MAFFAI Tony Acuna garnishes plates in preparation for the entrees that will grace them. Acuna’s Cafe opened in Monmouth Beach on March 6.

MONMOUTH BEACH — The long hours that went with opening their own restaurant, rather than being a hardship, have brought Kathy and Tony Acuna and their children closer together as a family.

The opening of Acuna’s Cafe on Beach Road was the realization of a dream — one that has not disappointed, according to the couple.

It also has meant that, rather than working long shifts at different restaurants and only seeing each other on their day off, they are together daily and see more of their children, who are regulars at the cafe.

During the seven months that they have been in operation, their customer base has steadily grown, according to Kathy. They began serving only breakfast and lunch between 6 a.m. and 3 p.m., but added dinner and changed their hours to 7 a.m. to 9 p.m. Tuesday through Saturday and from 7 a.m. to 3 p.m. on Sunday during the summer. The experiment proved so successful that they carried over the summer hours into the fall and have made them permanent.

Tony is the chef and Kathy presides over the front of the house. She said they are thrilled to be in business in the borough.

"This is exactly what Tony was looking for — a small community like this," Kathy said. "He was tired of all those big places."

The restaurant is located at the westernmost end of a strip of stores that stops before crossing a side street to a branch office of First Union National Bank.

Kathy was the banquet manager at the Colts Neck Inn, and Tony was working for a restaurant in Matawan when they decided to strike out on their own. They opened the doors on March 6.

The cuisine has a Mediterranean touch with Greek salads, stuffed grape leaves and gyros, but also appeals to a wider palate, with many chicken dishes, seafood pastas and quesadillas.

Kathy said Tony’s specialty is his sautés, noting that customers find his various chicken dishes with them to be unbelievable. "That’s the feedback we get," she said. She said his penne a la vodka also is very popular, as are turkey sandwiches made from turkey breast that he cooks fresh.

Kathy said they have had to overcome the reputation of the prior restaurant in their location as being largely an ice cream parlor and let people know they have a full menu of fine food.

"Everything on the menu is doing good — which is surprising in this business," she said.

The menu includes fresh soups every day, which Tony starts making when he arrives at 6 a.m.

"They are made of all fresh vegetables. No canned," she said.

"We do our own shopping, so everything is fresh. Nothing is frozen," she added.

Tony said when he gets an idea for a new dish, he puts it together and tests it with Kathy.

The Acuna Cafe also does catering, and Kathy noted it had just done a function at the Church of the Precious Blood on Sunday, the second assignment it has done for the church.

Kathy and her husband share a Mediterranean background. She said her father was Greek and her mother part Greek and part French-Canadian. She grew up in Montreal near her mother’s family until she was 10, then moved to Staten Island to be near her father’s family from New York, and went to work in family restaurants. Tony’s family comes from southern Spain, she said.

Kathy said their older children helped out in the restaurant during the summer — Tim, 18, now a freshman at Seton Hall; Dimitri, 13, an eighth-grader; and Bessie, 10, a fifth-grader. Kristina, 4, spends most of her days there.

"She knows how to set the table," Kathy noted of Kristina.

The family lives in Marlboro but shares more time together at the restaurant here, with the older children joining Kristina on site now after school or on the weekend.

"It’s a family thing," Kathy said. "You have to love what you’re doing, and you can’t be here part time or it doesn’t work. We’re together as a family now."

And part of that family, she said, are their customers.

"They’re like friends to us," she said. "They aren’t customers. They’re friends."