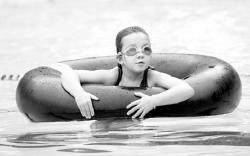 PHOTOS BY  VERONICA YANKOWSKI Courtney Thompson, 6, of Milltown, enjoys a swim in the rain at the Brookside Swim Club, Washington Avenue, on Saturday.

MILLTOWN — The Brookside Swim Club is celebrating 50 years in business this summer.

Celebrations to mark the anniversary, which was technically in July, have included a scavenger hunt, an inflatable obstacle course, music, food and a trivia contest.

The swim club is more than just a place to go swimming, according to membership chairwoman Leslie Thompson, who said she has belonged to the club since she was an infant. There is a sand volleyball court and a basketball court, as well as the main pool and baby pool.

"It’s a place for families. My parents joined in 1970. I’ve done everything here. I’ve been a lifeguard, I’ve worked in the office. I’ve taught swim lessons," Thompson said. 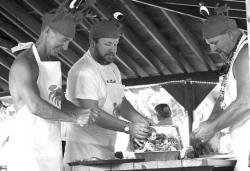 She said there are about 200 families that belong to the club, plus an additional 50 individuals. She said the club is not just for Milltown residents.

"Most of our members are from North Brunswick and East Brunswick," she said.

Thompson has continued the family tradition by involving her children, Courtney, 6, and Andrew, 4, in the club. 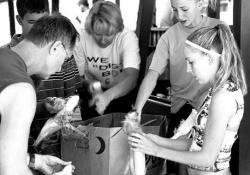 Members of the Brookside Swim Club in Milltown shuck corn during Crab Day.

"Everyone is given a roll of duct tape, a cardboard cutter, and a big piece of cardboard. They have three hours to build a boat, and then they race across the pool," Thompson said. "Some of them make it, some of them sink."