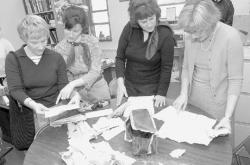 EATONTOWN — Imagining a world without computers, videos, Nintendos, Game Boys, PlayStations, Walkmans, VCRs, DVDs or CDs evoked wails of dismay and cries of "No!" from students at the Margaret L. Vetter School.

The assembly of fourth-, fifth- and sixth-graders had just been transported back to the 1950s, when the school was built, in preparation for the opening of the time capsule that was placed in the cornerstone 50 years ago.

Rosemary Simpson, a kindergarten teacher and member of the committee that organized the weeklong series of events to celebrate the school’s 50th birthday, told the students that if they had to stay inside on a rainy day in the 1950s. they wouldn’t be able to entertain themselves with a computer, or any of the other items she rattled off, because they hadn’t been made yet.

"The telephones were connected to the wall," she continued. "You had to stand when you talked on them. You couldn’t walk around with the phone." 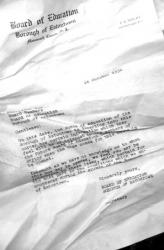 If they went to the movies, she said, there would be only one film showing.

"There was no multiplex," she said. "And if you wanted some popcorn, there was no microwave to pop it in."

A 20-minute video on the 1950s prepared by Christian Stuck, the son of first-grade teacher Robin Stuck and a student at Westminster Choir College in Princeton, helped put the students in the proper frame of mind to learn about what was placed in the time capsule.

When the time came to see what was in the time capsule, Principal Antoni Mrozinski held up a copper box, which he said was sealed with lead, the top of which had been pried open earlier in the morning. The box was retrieved the week before from the cornerstone, which has the date 1953 inscribed on it. The cornerstone was accessed from inside the school through a hole in the back of a closet in the school’s front office. 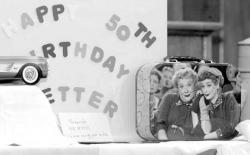 Jim Lees, head of maintenance, said it took him four hours to wrest the time capsule out of the cornerstone. Unfortunately, water had invaded the time capsule and most of the papers inside were badly water stained and many were crumbling and disintegrating.

Mrozinski explained to the students that when the time capsule was placed in the cornerstone, concrete and a board was placed over it, which caused a break and led to the water leakage.

"You can see what time and air and water can do to paper," he told them.

Nonetheless, Mrozinski found a letter intact that was put in the time capsule by the Board of Education at that time, dated Oct. 16, 1954. The letter explained that the members put items in the time capsule based on the conditions they encountered during the growth of Eatontown. The borough had only one school then, the Steelman School, Mrozinski pointed out. 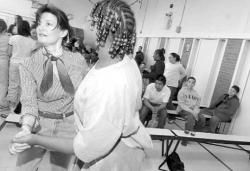 Helene White, a speech therapist teacher in the Eatontown School District shows Brandi German, 11, how to dance the hop during a celebration of the Vetter School’s 50th anniversary.

Mrozinski also found the year’s budget for the school district.

Joseph Gaetano, a member of the current Board of Education, said when the box was first opened and the letter was found that he knew George Winning, the secretary of the board when the time capsule was prepared. He said he also recognized the name Charles Stoneham, his son’s father-in-law, on a list of students that also survived in the time capsule.

Schools Superintendent Jean E. "Nina" Hoover told the students that "most children don’t get to participate in something as important and as exciting as this event is."

The video on the 1950s featured short clips from television shows such as "The Howdy Doody Show" and the "Ed Sullivan Show" or appearances by George Burns and Gracie Allen, Bob Hope, Lucille Ball and Desi Arnaz, Jackie Gleason and Liberace. Also featured were television commercials for Ajax and Frigidaire’s "Kitchen of Tomorrow," early newspaper comic strips of Peanuts, the first Barbie doll and children reciting the Pledge of Allegiance before the words "under God" were added to it.

Mrozinski also showed students a blown-up photograph of Margaret L. Vetter, a teacher and principal in the district for 30 years for whom the school was named at the dedication of the building.

The program wrapped with the students filing out by a 1950s "museum" with items of the era, including a replica of the original Barbie doll issued on the doll’s 35th anniversary, a beaded evening bag, white gloves and a 45 rpm record — many of which were brought in by Sally Welch, a resource room teacher.

There also were Lionel model trains and a large photo of the boats in Asbury Park. The photo, from the 1950s like everything else, made Mayor Gerald J. Tarantolo nostalgic. He recalled, as the children were examining the exhibits, how he would travel from Long Branch where he grew up to Asbury Park to go on a boat ride, and then attend a movie at the Mayfair Theater or ride on the Ferris wheel.

The mayor joked with the children when he greeted them at the outset of the program by asking them, "Do you believe that in 25 years, I’ll be 50?"

The answer from the assemblage was a quick and resounding "No!"