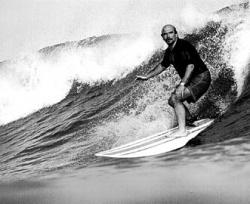 A surfer and surfing advocate, William “Doc” Rosenblatt has a new title -— Kahuna of the Year — given by the Surfers’ Environmental Alliance of Long Branch. LONG BRANCH — The Mayor of Loch Arbour can add ‘Kahuna’ to the list of his titles next month.

William “Doc” Rosenblatt will be named Kahuna of the Year by the Surfers’ Environmental Alliance (SEA), of Long Branch, next month.

In surfing circles, the title of kahuna means someone who is recognized as a respected elder to the surfing community and acknowledged as a mentor to young surfers, according to Brian Unger, president of SEA.

On Oct. 2, SEA is scheduled to hold its seventh annual Kahuna Awards Dinner at Neil’s on the Beach restaurant in Allenhurst, where Rosenblatt will accept his new title.

Rosenblatt, 56, a psychologist with a practice in Ocean Township, has been riding waves for more than 42 years and said he is honored to be receiving this title.

“I’m being recognized by my peers,” he said. “To me, that is very important.”

Kahuna means priest, or shaman, in Hawaiian, according to Unger, who said the title of kahuna is the most prestigious award in New Jersey surfing.

“He [Rosenblatt] has a deep and abiding devotion to the sport of surfing which is expressed in his actions that have helped the sport in New Jersey.”

Rosenblatt said that in the past 10 to 12 years, he has become an activist for the surfing community. He co-founded the Jersey Shore Surfrider Foundation chapter 11 years ago and has been active with Clean Ocean Action (COA) since the ’60s.

He sits on the National Board of the Surfrider Foundation, which is an international nonprofit organization that is dedicated to protecting the ocean and waves around the world. There are a total of 60 chapters and more than 40,000 members.

He said he has worked with the state, the federal and local governments to educate officials on existing surfing breaks — the areas where waves break that are crucial to the surfing community and are sometimes destroyed during beach replenishment projects.

Beach replenishment projects are continuing along the Monmouth County coastline to create larger beach areas, according to Unger

“Beach replenishment can destroy fishing and surfing areas or preserve them and make them better,” Unger said.

He said SEA and members of the Surfrider Foundation identify surf break areas in order to preserve the areas so that surfing can remain a sport for future generations.

Rosenblatt has also been instrumental in assuring that beaches are open and accessible to the public.

As a member of the Surfers Medical Association, a group of doctors from around the world, he has studied the injury rates of surfers, the psychological character of surfing, and has assisted in performance enhancement with professional surfers.

He shared his knowledge of the sport in a surfing column five years ago.

He said he is a regular on beaches from Asbury Park to Sandy Hook and surfs whenever there are waves, usually three to four times a week.

Rosenblatt said his advocacy stems from a commitment to protecting the ocean and preserving surfing.

“I am going to keep doing what I am doing,” he said. “I don’t do what I do for the recognition. I do what I think is right and important. This [surfing] is a rich culture and I want to make sure it continues.”