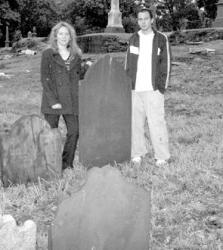 “Rutgers Rarities” founders Jessica Teal and Ray Brennan claim that the Willow Grove Cemetery in New Brunswick, among other campus locations, is haunted. There are vandalized and broken headstones, unmarked graves and an eerie tree struck by lightning in the middle of the site. Jessica Teal and Ray Brennan were planning on visiting the Graduate School of Education (GSE) anyway. They had planned to meet a friend at the College Avenue building of Rutgers University in August before receiving a strange phone call. Their friend, sounding frantic, claimed to have seen a bat flying through the doors on the second floor of the GSE, in full-attack mode.

Teal, who previously worked at the building, heard stories that people heard kids running around the empty top floor, and giant albino rats were looming outside. Interested in investigating this abnormal story, Teal and Brennan decided to take their camcorder and audio recorder to the building, hoping to solve the mystery of the rabid, human-chasing bat.

Once inside, the graduate students noticed a bat hanging from a vent. The bat got excited and flew through the L-shaped hallway, coming close to the door of the stairwell. Although the bat was contained in its area, it flew close to the fence and appeared to be going through walls, they said. The duo dismissed the tale of the rabid, magical bat, but instead marked the beginning of their journey to uncover Rutgers rarities and unexplained phenomena.

PHOTOSBY SCOTT PILLING staff Teal, 28, a labor studies graduate student, and Brennan, 27, working toward his Ph.D. in ceramic and materials engineering, have compiled a Web site called “Rutgers Rarities” to uncover the myths and mysteries so well known – and some not so well known – to Rutgers students on the New Brunswick and Piscataway campuses.

“A long time ago, Ray came to work and said he had seen a wolf, but nobody believed him. I believed him, and I told him some of the stuff I had seen, like a unicorn, which turned out to be an albino deer. We swapped stories, and our friends told us theirs,” Teal said of the project that began six months ago.

In July, they started documenting their stories and launched the Web site on Sept. 4. Their favorite investigation to date was a trip to the University Inn and Conference Center on the Douglass Campus. They visited the hotel one night, which is rented out mostly to visiting professors, as the desk clerk was locking up.

She told them that the two owners of the house, the Carpender family, of New Brunswick, are believed to still occupy the house; a female spirit accompanies the new wing, while a male spirit inhabits the old wing. According to various guests, strange noises, tapping and glimpses of a woman-like shadow were reported over their stays.

While walking through the inn to investigate, “I felt some kind of force pull on my hand, like something was pulling on my camera,” Brennan recalled. “It was like it was pulling on the straps. Then it pulled my hand, so that I was shooting upward. I was actually fighting the force. At first, I was trying to justify it in my head, maybe it was a vent, but there was not any force that strong.”

At the same time, Teal’s audio recorder, equipped with brand-new batteries and a brand-new tape, was shutting on and off by itself.

“There’s no reason why it should have happened,” Teal noted, saying that the recorder worked perfectly fine afterward.

In the midst of their studies, they came upon Room 335, which sounded as if there were knocking noises coming from behind the door, and noticed the adjacent room had the light on. Val, the desk clerk, swore that the wing was empty, saying that she’s heard similar tales from other guests. She had the two accompany her, while she locked up the rest of the inn.

“Ray is a bit of a skeptic … this is the encounter that made Ray a believer,” Teal laughed, adding that even the most skeptical desk clerks there said they had received phone calls from otherwise vacant rooms.

“It definitely woke me up a little – or should I say, a lot,” Brennan said. “University Inn freaked me out because I couldn’t explain what happened.”

The only other time Teal’s recorder acted erratically was at the Little Theater on Cook Campus. Several people, including an account by The Midnight Society, claimed that band equipment would fall over inexplicably, and lights would flicker on and off. Apparently, the former director loved the theater so much she moved in and remained there, seemingly forever.

“Anyone who’s there regularly has a story about it,” said Teal, who noted that the building is still used for rehearsals and classes.

During their tour of the theater, Brennan’s camcorder picked up an “orb” floating toward the ceiling in the darkness, of which the footage is posted on the Web site.

“There was no source of light to cause a reflection,” Brennan said.

However, the two do not assume everything has a paranormal explanation.

“I think probably most local legends have some knowledgeable explanation. With the orb … we try to acknowledge that and try to embrace some skepticism,” Teal said.

Also on the Cook/Douglass campus is the Reverend Hall House, where the reverend and the choir singer he was apparently having an affair with were brutally murdered in the 1920s. The crime went unsolved, and legend says the murder weapon was buried during the renovations of the house where the dean of Douglass College currently resides. Teal said that even the maintenance workers get a bad feeling there, refusing to go into the basement.

Another interesting find was at the Arbor Trail behind the University Inn. Teal said she accidentally stepped on a pile of crackling material, which turned out to be a pile of bones. Aware that coyotes have been spotted in the area, the student detectives assumed that these were the remains of a forgotten wild dog. However, Teal has “been online scouring the Internet” and cannot find a match for the bones. A 1-foot femur proves the bones belong to a large mammal, but the skull has oblong-shaped eye sockets, “which just doesn’t seem to fit in,” according to Teal.

“It could be a collection of bones, but what type of creature would stockpile bones?” Brennan questioned.

Yet there have been several sightings of coyote packs around the area. Teal and Brennan said they observed for themselves a pack of 10-12 coyotes moving away from Avenue E on Livingston Campus in Piscataway, close to the joggers’ path.

“They were all different shapes and sizes. One almost looked like a stereotypical gray timber wolf, with glowing eyes,” Teal said. “We knew it was not one or two escapees from [neighboring park/wild animal zoo] Johnson Park. It was a lively herd, reproducing, because there were big ones and little ones.”

“There is no doubt about what we were seeing. They were staring us right in the face,” Brennan added.

Outside of the area, Teal and Brennan had an eerie experience at Dismal Swamp in South Plainfield. While driving along a gravel road in the wetland area, Teal heard a rhythmic chanting behind her. Turning to ask Brennan if it was him, she noticed he was staring out the window, unobservant of the noise she heard. When he replied “What?” innocently to her stare, she turned the car around and drove as fast as she could, almost crashing into a tree.

“I saw the look on his face, and I had a bad feeling,” Teal recounted. “Later that night, Ray got really sick, really ill. I’m convinced we were punished for trespassing.”

The object of the investigators is to visit the locations mentioned on their site and prove — or disprove — the urban legends collected over the 240-year history of the university. They obtain their information from external, credible sources and verify it with historical documents and university officials, such as facility maintenance workers who have witnessed their own share of wild animals and wild noises.

“We wanted to not just collect stories but find if there was some truth to them. That was the core of the project,” Teal said.

“Adrenaline heightens your senses … that is part of the fun of it,” Brennan smiled. “It’s just fun. It’s something to look forward to. Having regular full-time day jobs, it breaks it up. And it’s given me an opportunity to see what is around the area. It is interesting to see the influences, how this place was back in the day, and how it is in the modern day.”

The Web site, www.RutgersRarities.com, currently features about 20 accounts. The grad students try to investigate their stories once a week, and constantly upload new pictures and videos to the site. Teal and Brennan are hoping to eventually compile enough legitimate stories to write a book or make a documentary, and get the official Rutgers University blessing.

“We have hours of footage that, if edited, could be something,” Brennan said.