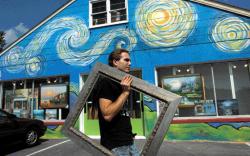 Above: The Art and Frame Store’s warehouse on the corner of Brick Boulevard and Route 70 has been turning motorists’ heads ever since one of its owners, Josh Micciolo, of Lakewood, commissioned former employee Phyllis Vivoli to paint a mural on the shop’s exterior. Below: Vincent van Gogh’s “The Starry Night” was the inspiration for Vivoli, who painted the mural across three exterior walls. The corner of Route 70 and Brick Boulevard could never be considered a pretty place, even before Bradlees and Foodtown closed their doors. But that’s recently changed.

Phyllis Vivoli was already thinking big when she approached Art and Picture Store co-owner Jake McDonald about painting a mural on one of the building’s exterior walls.

But when he gave her the go-ahead, he had a bigger picture in mind.

“I was intrigued,” said Vivoli, a freelance artist and former employee of the shop. “I always want to paint on something large, but I’ve never painted an entire building.” 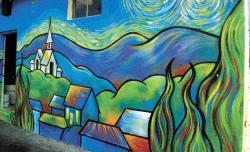 PHOTOSBYMIGUEL JUAREZ staff “Brick can be a little drab with all the big stores like Wal-Mart and Target,” said McDonald. “We wanted to give it a small town artsy feel. If you go to Philadelphia or Spring Lake, there are murals all over the place.”

On the building’s three sides, Vivoli painted a pastoral landscape replete with rolling hills, small houses, a church’s steeple, stars and the moon.

Besides brightening up Brick’s landscape, McDonald says that the mural also helps the shop, located on Brick Boulevard near the intersection of Route 70, stand out a little more and has increased the store’s business.

“Our store is one of the little ones that gets lost on Brick Boulevard,” he said. “Now I hear people talking about it, going out of their way to look at it and stopping to take pictures.”

Both Vivoli and McDonald wanted something on the building that would be recognizable, and after deciding on “The Starry Night,” Vivoli went home and sketched out a drawing for McDonald’s approval.

But while she had a sketch in hand as a reference point, Vivoli painted the building – which took 53 hours to complete – in freehand, altering the original to suit her needs.

“Van Gogh’s original is very dark,” Vivoli said. “I wanted to make my colors more vibrant and more fun. I wanted it to let it be me and just come out.”

Although she used spray paint and rollers, one 4-inch brush was her primary tool, using every angle of the brush to achieve the look she wanted.

As she painted the mural, which she did from the bottom up, onlookers would blow their car horns and yell out the windows to Vivoli.

“It was funny until I was on the scaffolding,” Vivoli said, “then my knees were shaking and I had white knuckles.”

Vivoli, a former Brick resident who now lives in Neptune City, paints murals for friends and has a collection of original artwork of mermaids and dogs and does face painting for parties, festivals and other events.

She now works as a chalkboard artist for Foodtown Supermarkets, where her art embellishes the chain’s weekly sales board.

“I only like to do what’s going to be fun,” Vivoli said. “I want to enjoy what I’m doing.”