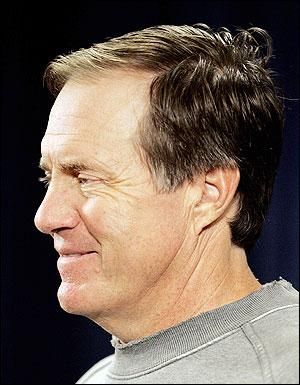 FOXBOROUGH, Mass. (AP) — Hey, Chad Johnson, Bill Belichick can talk trash, too.
New England’s normally dour coach stepped out of character Thursday to playfully jab at Johnson, a day after the Bengals wide receiver vowed to wreak havoc on the Patriots’ secondary when the teams meet Sunday in Cincinnati.
Johnson specifically pleaded with "Mr. Belichick" to let cornerback Asante Samuel, whom Johnson described as a good friend, cover him one-on-one. "I won’t score," Johnson promised. "I’ll stop at the one and go out of bounds or something."
"Tell him we’d cover him one-on-one all the time, but he pushes off more than any receiver in the league," Belichick said with a grin. "He must be paying off the officials not to call it, so we’re going to have to double-cover him some. … Not that he can get open."
The Patriots are famous for using opponents’ slights — either real or perceived — as motivation. But the fun-loving Johnson, a three-time Pro Bowler, seems to get a free pass.
Belichick called him an "entertaining kid" with a "good sense of humor" and said the two have bumped into each other at various offseason functions.
Belichick said he worked out Johnson at USC before the 2001 draft and remembered Johnson, who played at Oregon State, proudly flying his college’s flag as he drove onto campus.
Patriots strong safety Rodney Harrison, who traded real barbs with Philadelphia Eagles receiver Freddie Mitchell leading up to the 2005 Super Bowl, also got a chuckle out of Johnson’s to-do list. Johnson said he would knock Harrison’s helmet off, flip Samuel upside down and fight Eugene Wilson if the free safety tried to hit him coming over the middle the way Cleveland’s Brian Russell did in the Bengals’ second game this season.
"The circus is in town, or out of town, I should say," Harrison said. "He’s a funny guy. This is the way he brings humor to the game and keeps himself energized. I know it’s all in fun. He didn’t mean anything personal about it."
Johnson said he actually holds Harrison in high regard, and not just because he refers to Harrison as an "original, old-school trash talker."
The Patriots have played the Bengals three times since 2004, twice in the preseason. Johnson said his on-field, pregame chats with Harrison have been like a "father-son talk" in which Harrison dispensed "great advice about staying in a straight line and staying focused and staying out of trouble."
"If I’m in the headlines," Johnson said Harrison told him, "be sure that it is for something positive."
Johnson could make headlines Sunday. New England has surrendered four long touchdown passes over the last two games, and its secondary is battling injuries.
Cornerback Ellis Hobbs missed his second straight day of practice Thursday with a wrist injury, and Wilson and reserve safety Artrell Hawkins are nursing hamstring injuries. All three players are questionable for Sunday’s game. Reserve cornerback Randall Gay is out for the season with a hamstring injury.
Copyright 2006 Associated Press. All rights reserved. This material may not be published, broadcast, rewritten, or redistributed.