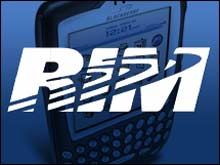 TORONTO (Reuters) — Shares of BlackBerry maker Research In Motion Ltd. hit a record high Friday as analysts lavished upgrades on the stock after the company posted strong second-quarter results and forecast more of the same.
Shares of Waterloo, Ontario-based RIM (up $16.94 to $103.00, Charts) rose as high as $104.50 on Nasdaq, spiking about 21 percent or $18.44 from its close of $86.06 before the results were announced Thursday evening.
That broke through a previous high of $103.56 set in December 2004, and many analysts are looking for RIM’s stock to rise another $30 or $40 in the next 12 months.
The stock also rallied on the Toronto Stock Exchange, zooming C$20.60 to C$115.90 in morning trade.
Not only did RIM’s performance beat its own forecasts and as well as analyst expectations, but the company forecast third-quarter results that analysts variously described as "huge," "spectacular" and "phenomenal."
Spurred by strong initial sales of its new, consumer-aimed BlackBerry Pearl device, RIM predicted that during the third quarter it should be able to add another 800,000 subscribers to its current total of about 6.2 million. It said its earnings per share will be in the range of 88 to 95 cents on revenue of between $780 million and $820 million.
"These results mark yet another significant upwards revision for analysts, which seems to come once every two years," Paradigm Capital analyst Barry Richards wrote in a note to clients. "We also think a stock split becomes increasingly likely on these results."
Paradigm, like Canaccord Adams, UBS, and RBC Capital Markets among others, raised its target for the stock Friday.
"This (third-quarter) guidance is outstanding and reflects the strong initial sell-through of the Pearl Blackberry 8100 and a growing base for existing products," Richards wrote in hiking his target for the shares to $140.
The Pearl is pushing RIM into relatively new territory — that of going after individuals rather than corporate accounts — and some have cautioned that competition with firms such as Motorola (up $0.22 to $25.11, Charts) and Nokia (down $0.04 to $19.86, Charts) could be fierce.
But both investors and RIM co-CEO Jim Balsillie appeared to be brushing such concerns aside.
Balsillie, for example, has described predictions of new competition as "misinformation," despite a growing chorus of analyst voices who warn it could be profound.
Other analysts tend to agree — if a little cautiously.
"While we think the fight with Nokia and Motorola will be brutal, we are convinced RIM can compete and capture some meaningful consumer market share, considering the amount of revenue RIM can generate for the carriers through data-based revenue," Canaccord’s Peter Misek wrote in a note to clients.
However, he added, "Nokia, Motorola, Microsoft (down $0.04 to $27.36, Charts), Samsung, and others are formidable competitors."
Nick Agostino, who covers RIM for Research Capital, wrote to clients that RIM will further benefit as carriers who realize the BlackBerry’s growing contribution to their own bottom lines begin reducing data-plan prices to attract more customers.
Data plans for the Pearl, for example, are being offered for as low as $20 a month by T-Mobile, the carrier through which the Pearl was first launched in the United States earlier this month, Agostino wrote.
"Carriers are also beginning to reduce monthly data plan pricing for the BlackBerry, which should act as another positive catalyst for longer-term subscriber growth," he wrote.
"We believe carriers are doing this because they realize the strong profitability offered by each of their BlackBerry subscribers and are seeking to grow their customer base as a result."