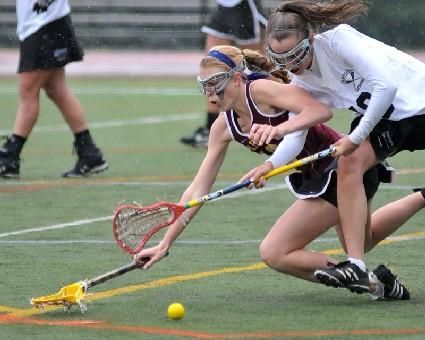 Team must regroup for run in sectionals

by Rudy Brandl, Sports Editor
BERNARDS  Sunday’s Somerset County Tournament final started out great for the Hillsborough High girls’ lacrosse team. The Raiders won the opening draw and scored a goal just 11 seconds into the game.
That was the only lead the HHS girls enjoyed against Bridgewater-Raritan. The top-seeded Panthers scored four of the next five goals and fought off several Hillsborough rallies the rest of the afternoon before pulling away late for a 15-11 victory.
B-R avenged a loss to Hillsborough in last year’s county final. The Panthers also defeated the Raiders for the second time in four days, having also earned a share of the Skyland Conference crown with a 12-10 victory Thursday in Bridgewater.
HHS head coach Beth Murrin was hoping her girls would come out with more motivation after losing to their biggest rivals. The Raiders spent the entire tournament on a crusade determined to prove they were disrespected by not receiving the top seed despite beating the Panthers in the only head-to-head battle before the county meeting. Sunday’s final hurdle proved to be the most difficult and losing two straight games to B-R made not repeating as county champs even tougher to swallow.
”We don’t give up 15 goals very often,” Murrin said afterward. “They just seemed to get every 50-50 ball and we didn’t. We got beat today. They hustled more. We had some good moments, but not near enough.”
Dorian Gilmartin-Dzitko scooped up a loose ball after the opening face-off and beat everyone down the field for a breakaway goal. That lead lasted a little over a minute. Carlee Dragon scored the next two goals, first on a free position and then off a nice spin move.
Lindsey Watts, the leading scorer for the Raiders, tied the game at 2-2 on a free position blast, but that was her only goal of the day. B-R scored the next two goals and never trailed again.
The Raiders managed to tie the score at 5-5 and 6-6 later in the first half and forced deadlocks of 9-9 and 10-10 in the second. They were always playing catch-up and seemed a step behind the Panthers in a game that was played during a steady rain.
Bridgewater’s standout players had a big day and produced a balanced attack. The Dragon sisters, Alyssa and Carlee, each scored four times. Anna Tichy also fired in four goals, while Kelly Fenton added two.
The HHS girls were able to stop the Dragons in the season’s first battle, a 10-8 victory in Hillsborough. The Panthers got their offense going in Thursday’s 12-10 regular season win and performed even better in Sunday’s 15-goal outburst.
”She’s never scored that much against us,” Murrin said, referring to Alyssa Dragon. “We took her out of that (April) game early and it never mounted.”
B-R’s defense did a solid job keeping Hillsborough’s senior stars in check. Watts only scored once and Sara DiClemente did not hit the back of the cage.
Juniors Kelsey Palmer and Gilmartin-Dzitko led the Raiders with four goals apiece. Tina Marino, another junior, scored twice. Hillsborough held a slim 15-13 edge in draw controls, but was plagued by 17 turnovers.
”We knew what we had to do, but we had some turnovers that hurt us,” Gilmartin-Dzitko said. “We didn’t stop the ball on the break and we didn’t get the 50-50 balls we usually get.”
Tichy and Fenton scored to give the Panthers a 4-2 lead, but Gilmartin-Dzitko continued her explosive first half with a beautiful cut to the cage to make it 4-3 with 13:55 left in the half. Alyssa Dragon scored the first of her four goals to restore the two-goal lead, but Tina Marino and Gilmartin-Dzitko drew the Raiders even.
B-R scored the final two goals of the first half and opened the second with Fenton’s second of the day after Hillsborough held possession for four minutes but couldn’t get one past goalkeeper Kristen DeTroia.
The Raiders were down but not out, thanks to a three-goal surge from Palmer. The junior scored three times within a span of 1:49 to tie the game at 9-9. Gilmartin-Dzitko found Palmer cutting to the cage to start the rally. Ashley Redelico hit Palmer with a nice pass for the next goal. Palmer beat the defense with a half-field sprint to tie the score with 16:20 to play in regulation.
B-R called timeout and the rain intensified. The break seemed to disrupt Hillsborough’s momentum. Tichy scored on a fast break with 14:52 left, but Gilmartin-Dzitko answered with her fourth of the day just 40 seconds later.
After that, it was all Panthers. They scored the next five goals, with four different players hitting the net. By the time Marino scored with 1:30 to play, it was too late for the Raiders to make a charge.
”They just shut us down,” Gilmartin-Dzitko said. “They got a couple of draws and took advantage. We didn’t stop them the way we should have.”
The Raiders won’t have much time to dwell on the county loss. They were scheduled to begin state tournament play Tuesday. If they defeat Old Bridge and Columbia, the HHS girls likely will get a fourth shot at B-R in the sectional final.
”This was disappointing,” Murrin said. “I would have liked to see them come back today after Thursday, but they’ll come back. One game at a time.”
”We have to put this behind us,” Gilmartin-Dzitko said. “This is a going to be a sore for a while, but we’ll come back strong. We have to keep things in perspective.”