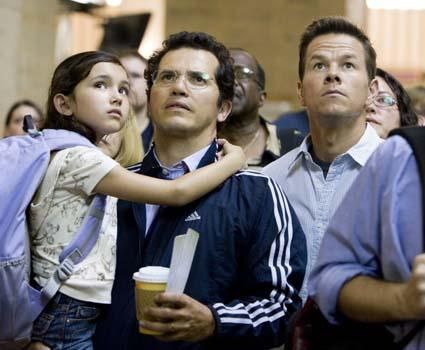 For local viewers of M. Night Shyamalan’s latest foray into fear, the Princeton dialogue and scenes will be most amusing.

By Bob Brown
EVER since his surprise hit The Sixth Sense (1999), M. Night Shyamalan has been trying to prove that he’s not just a one-hit wonder. This is his fifth attempt since then, and the four others have not quite been able to re-create the magic. Perhaps he’s trying too hard to top himself. He came close with Signs (2002), only to crash and burn with Lady in the Water (2006).
The Happening dials things back. It focuses less on the external trappings of horror — the special effects, the costuming, the bizarre — and more on fear of the unknowable and how that can complicate relationships. As a writer-director, Shyamalan wants to simplify the palette and have the characters and their emotions stand out sharply against what is a very spare landscape.
Before filming began, he had a clear vision of the mood and feel he wanted to create. In production notes to the film, he said, “I wanted a very naturalistic thriller style, very clean, almost Old School, going back to before we had all these gadgets and computers, when it was all about direct, resonant storytelling.” He wanted to “make it feel like a 2008 version of a 1950s paranoia movie.”
One such example from that era, with cheap, minimal effects, was the classic The Blob (1958), in which teenager Steve (Steven McQueen — he was not yet Steve back then) and his girlfriend Jane (Aneta Corsaut) tried to save their small town from an alien life form. There’s a kind of dorky charm to the characters and the situations that make this movie a guilty pleasure. It was filmed in a Phoenixville, Pa., diner and the surrounding area, not exactly the center of film land.
So what is it about the Delaware Valley that inspires dread? Shyamalan has not moved far from his youth. Philly and its suburbs are the perfect settings for his spooky doings. To get the look and atmosphere he wanted, the director worked with cinematographer Tak Fujimoto and production designer Jeannine Oppewall, setting most of the action outdoors in Pennsylvania farmlands near Unionville with an important interior scene in — what else? — a Phoenixville diner. (Perhaps eating in Phoenixville is scary enough for two movies.)
The movie is really a road film that moves rapidly from the city to the country, from populations to isolated groups, down to a single family: Elliot Moore (Mark Wahlberg), his wife Alma (Zooey Deschanel), and young Jess (Ashlyn Sanchez), the daughter of Elliot’s colleague Julian (John Leguizamo). They are fleeing the onslaught of a mysterious malady that seems to have started in city parks like New York’s Central Park and Philadelphia’s Rittenhouse Square. A breeze blows through the trees and grass, carrying a virus or bacteria or poison, something that disorients everyone who breathes it and turns them suicidal.
As a Philadelphia biology teacher, Elliot embraces rational, scientific problem solving. But the fast-moving, relentless killer breeze throws even him into a panic. Rushing out of Philly by train, he and Alma and Julian are finally caught short when the train stops in a little town west of the city. From there, everyone tries to hop a car, but Julian can’t connect with his wife, who seems to have taken a bus to Princeton. (For local viewers, the Princeton dialogue and scenes, obviously shot nowhere near here, will be most amusing.) Julian takes a separate route and entrusts his daughter to the Moores.
Eventually, dead bodies block roads in all directions. Elliot figures the threat is greatest when people are in groups, so he and a small band strike out on foot through the fields until it is eventually down to just the Moores and Jess, hiding in a farmhouse. Outside, where the ill wind blows (as it does menacingly, almost as a separate character), is no place to be.
The film’s rating, a first “R” for Shyamalan, is owing to the graphic depiction of suicides by guns, needles, high plunges, even a large industrial power mower. Amid the gruesome details, there’s a fair amount of loopy dialogue, as characters dramatically face the obvious with clichés: “What’s happening?!!!” (Well, duh, “The Happening,” you nitwit.) Wahlberg is focused in close-up to emphasize his splendidly furrowed worry-brows. And there are some goofy characters, like the nursery owner (Frank Collison), who gives the Moores a lift and asks earnestly whether they like hot dogs — his preferred survival rations.
One has to believe that the sheer silliness is homage to those old 1950s paranoia films rather than any ineptness on Shyamalan’s part — but one never knows. Still, the lush, unpopulated landscapes and James Newton Howard’s pulsing score emphasize the eerie mood and the frantic pace. What you don’t get is much character depth. Elliot and Alma are having marital problems and there’s nothing like a massive biological threat to bring them closer. But considering how unchemically bonded they are, it’s a mystery why they ever connected in the first place, as much a mystery as the suicide virus. The answer, my friends, is not exactly blowin’ in the wind.
Rated R for violent and disturbing images.