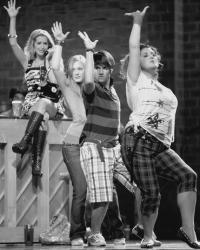 Max, who is a student at Professional Performing Arts School in New York City, spent four months in Salt Lake City, Utah, with the cast of the popular Disney franchise film series. The third title is the first of the “High School Musical” films to make it to the big screen.

The original “High School Musical” made its debut in January 2006 on the Disney Channel and posted the highest ratings ever for a Disney Channel original movie at the time.

It went on to become a smash hit internationally. “High School Musical” has reached more than 250 million viewers in more than 20 languages across 100 countries, according to information provided by Disney.

That was followed in short order by “High School Musical 2.”

Max, who just returned from the movie’s Los Angeles premiere, can be seen throughout the movie as a principal dancer. Find No. 4 on the basketball team with the name Patrick on the shirt and you have found Max.

Max described working on the film as an extremely fun experience that did not feel much like work. When asked about any behind the-scenes antics, Max laughed as he described a water balloon fight against the movie’s star, Zac Efron.

Max said Efron was notorious for throwing water balloons, so the entire cast banded together to get revenge on their co-star. Max said people were hidden all across the set armed with water balloons, pelting Efron at every turn until he was drenched.

As for his other work, Max said his character Randy on “Ugly Betty” is one of his favorites. Randy comes off as a bully, but there is a lot more beneath the surface, Max described. The rising star said his character interacts with actor Mark Indelicato’s char- acter Justin Suarez. Max was first seen on air in the Oct. 23 episode of “Ugly Betty.”

With a soon-to-be-familiar face, Max said his career in showbiz started at Dance

“I grew up there,” Max said of the dance studio.

The actor said he danced at the studio for 10 years and developed a love for performing. The owners and directors of Dance Attitudes, Paige Sayegh and Shari Devora, said they are proud of Max.

“He’s always been a star here,” Sayegh said. She recalled that whenMax first came to the dance studio as a youngster, he was the only male student, but that did not deter him.

“This is just the beginning for him, he’s going to be a star,” Sayegh said.

A private screening of “High School Musical 3: Senior Year” was held at Dance Attitudes on Oct. 25. Max will be back at the dance studio on Nov. 16 to teach the dance routines from the film. The event will be a fundraiser for the Children’s Hospital of Philadelphia.

Sayegh said the dance studio hosts many fundraisers throughout the year. Most recently the studio raised $17,000 for a local cancer walk, the owner said.

She said when Max called about coming to teach at the studio, it was decided to use his visit to benefit a charity. Choosing from a long list of charities was not easy, but ultimately the directors decided on the Children’s Hospital of Philadelphia because the facility benefits all children.

The cost to attend the Nov. 16 event is $18 per dancer. Limited spaces remain open and can be reserved by e-mailing DanceAttitudes@ aol.com, with the subject line Dance for a Cause, or by calling 732-780- 8997.

Max resides in New York City during the week for school and returns home to Marlboro on weekends. His high school allows students the chance to learn while affording them the opportunity to work, which is a good thing for Max because he will continue filming his recurring role in “Ugly Betty.” The young actor is hoping to earn a spot in the cast of the upcoming remake of “Footloose.”

While Max makes his way in Hollywood, his Dance Attitudes family back home in Marlboro will always be rooting for him.

“We’re very proud of him,” Sayegh said, adding that everyone at the dance studio was eagerly waiting to watch Max’s debut on “Ugly Betty.”