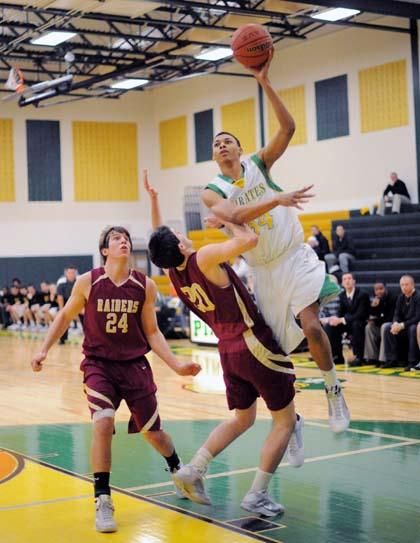 By Bob Nuse, Sports Editor
They took turns being the hero at West Windsor-Plainsboro South on Wednesday.
First it was Jack Dennehy, whose three-point shot with 7.1 seconds left gave the Pirates life.
Then it was Dan Balevski, who calming sank a three-point shot as time expired, sending the Pirates into overtime against a Hillsborough team looking to knock off the No. 1 seed.
And then there was Austin Witter, whose basket from just inside the three-point line with less than two seconds left ultimately gave the Pirates a 58-56 win, capping a comeback that was hard to believe.
”That was a big comeback,” said Witter of the Pirates, who overcame a five-point deficit in the final 10 seconds. “Dan’s shot was the biggest shot I have ever seen. Mine, if I don’t make it we just go to another overtime. His shot brought us into overtime. We needed that or the game would be over.”
And it wasn’t just big shots that lifted the Pirates into tonight’s Central Jersey Group IV semifinal against Sayreville. The Pirates did the little things that made the difference.
”I give Chris Johnson a lot of credit,” said South coach Bob Schurtz, whose team improved to 22-3. “He’s my guy and he was able to do just what we talked about. He got a good screen from Drew Siversten, CJ came off the dribble and attracted Dan’s man and made an excellent pass to Dan who was in a good position to square up and knock it down.”
For Balevski, the shot was the kind you dream about when you’re in the driveway as a kid, trying to beat the buzzer to win the game.
”I’ve always dreamt of hitting that big shot buzzer beater to win the game,” said Balevski, who finished with 12 points. “It was a great pass from CJ and it was an open shot. I wasn’t even thinking when I took the shot. I just got the ball and shot it. CJ drew my defender toward him and kicked the ball off to me and I just shot it.
”Anything is possible in basketball. We just had to stay positive. Next game we just have to come out and play. We want to get that Central Jersey Group IV championship banner. It’s been one of our goals since the beginning of the season.”
The Pirates trailed, 46-41, late in the fourth quarter when Dennehy made a three-point shot to get them to within two. After a Hillsborough basket by Frank Mitchell, who finished with 31 points, the Pirates trailed by four with less than a minute to play. Dennehy scored again to get within 48-46, and with the help of some poor foul shooting by the Raiders, the stage was set for the comeback.
”The last timeout of regulation I talked about that we could not sit back and wait for this happen,” said Schurtz, whose team also received 18 points from Dennehy. “We had to go get the victory. We had to go get the rebounds and make the big shots. I thought we were able to still execute the last two possessions in regulation offensively and the last defensive and offensive possession in overtime. We had possessions before that where we had bad looks. We had them missing shots and had it at a two-point game and could have won it there.”
After Balevski’s shot at the buzzer sent the packed gym into a frenzy, the teams traded baskets in overtime before Witter hit the shot that kept the season alive for the Pirates.
”I just held the ball and I was isolated and just took that last shot,” said Witter, who finished with 20 points. “It was a great situation. I like having that pressure. We made some big shots. Dan made one. Jack is always making big shots like that. I think it is in his blood.”
Each big shot led to the next one. And in the end, there were plenty of heroes.
”In that situation, with a tie game, I thought that was our best advantage,” Schurtz said of Witter waiting for the final shot. “I thought it was a situation where it was either double overtime or a victory. Jack Dennehy’s rebound on defense got us the ball and then he made a great outlet pass against pressure to get the ball to Austin and let him get a good look.”