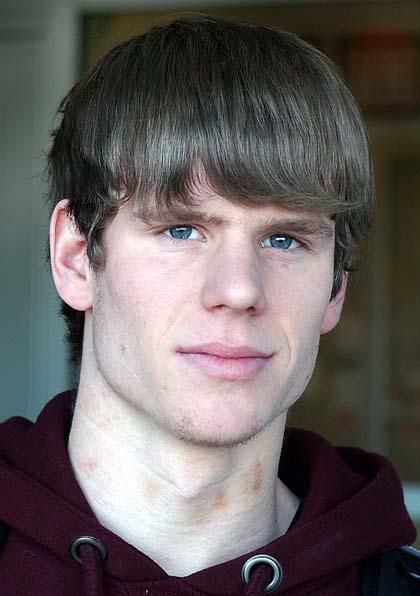 By Justin Feil, Assistant Sports Editor
In three-plus seasons with the Montgomery High School ice hockey, Amo Hare had enjoyed being a part of 54 wins.
None of them, however, had been for an outright championship.
”Last year, we split the conference championship with Ridge,” said Hare, a senior captain for the Cougars. “It wasn’t the same as winning a championship.”
Hare had a pair of assists in Montgomery’s 4-1 win over Brick Memorial last Monday in the Jefferson Memorial Tournament semifinals. His contributions helped push the Cougars into the final, where his all-around play helped to bring the Cougars a 3-2 win over Chatham on Wednesday and the title that had eluded him and his classmates.
”It’s good,” said Hare of his 55th career win at MHS. “It means a lot. It’s the first championship that my class has won as seniors.
”A lot of our team is seniors,” he added. “We figured it’s our last year and we have to leave it out there. All the games were pretty close. We were able to pull out the last game from behind. It was nice.”
Amo Hare is the Princeton Packet Athlete of the Week.
”They made it to a bunch of finals,” said MHS head coach Rob Scarpa, whose team moved to 7-0-2 with a 2-2 tie against Hillsborough on Tuesday. “This is a big step for them.
”We were down in the final and we scored early in the third period and then won it with less than two minutes left. That’s pretty good for us.”
Goals from senior captain Tom Hackett and senior forward Mark Yetter helped the Cougars tie Chatham, 2-2, before sophomore forward Kevin Wanke notched the game-winner with less than two minutes remaining off passes from Yetter and Jeff Garinger.
”The biggest thing was as a team we were able to keep our composure as a team,” Hare said. “We were able to keep our heads and pull it out in the end.”
The Cougars have the team make-up to be able to ride out an early deficit and rally. Hare is part of a senior-heavy squad.
”They play with poise now,” Scarpa said. “Where they used to get easily aggravated and flustered, now they have faith they can come back. We’ve had a couple difficult situations and they’ve come through them all pretty much. They know if they outwork anyone, they have a good chance to win.
”When you have seniors, it’s a different feel to the team. We’re senior and sophomore heavy. The sophomores have stepped up. The seniors show them how to do it. It’s a pretty big difference from some teams. At the end of last year, they were that way too. It wasn’t always that way. They doubted themselves.”
Hare is trying to ensure that the doubts don’t creep back in the Cougars. As a captain, he has a bigger platform and a bigger role in keeping confidence high.
”The fact that you’re a senior, everyone looks to you,” Hare said. “It’s different from past year. There are so many seniors on our team. So some of the guys you’re leading are your classmates. We’re trying to make our last season together a good one. I’m trying to take more of a leadership role as a senior captain.
”I just try to control everything I can control with my own play,” he added. “My line doesn’t start every game, but I try to make sure my line sets the intensity.”
Hare may not have the gaudiest statistics on an MHS team that essentially has two top lines, but he plays a role in many facets of the game for the Cougars.
”It’s a lot of the same stuff I’ve come to expect from him,” Scarpa said. “He’s a high energy player and he’s very consistent in what he does. Some kids you worry about, are they going to show up? He shows up and skates hard and does all he can for his teammates every game.
”He kills penalties, blocks shots, he’s on the power play. I can put him out there in any situation and know he’ll get the job done. It’s nice to have a guy like Amo around.”
Hare continued to do the little things in a run through the Jefferson Holiday Tournament. It began with a 3-2 win over Morristown before the Cougars pulled away from Brick Memorial and came back on Chatham.
”I think the biggest aspect of having a team with a lot of seniors on it is there wasn’t a point in the Chatham game where we doubted,” Hare said. “We were confident we were going to pull it out.”
And with it, Montgomery pulled out the biggest win in Hare’s career for what it meant to the senior class and what it means for the confidence of this year’s team.
”I think we’ve been playing pretty well,” Hare said. “The beginning of the season, we started off tying West Essex. It made us realize, even though we do have a lot of seniors and a lot of good players, we have a lot to prove as a class since we hadn’t won anything.
”Being able to pull out close games and handle teams we’re supposed to beat is something we need to keep doing the rest of the season.”
Hare hopes that’s enough to enjoy a few more championship victories.