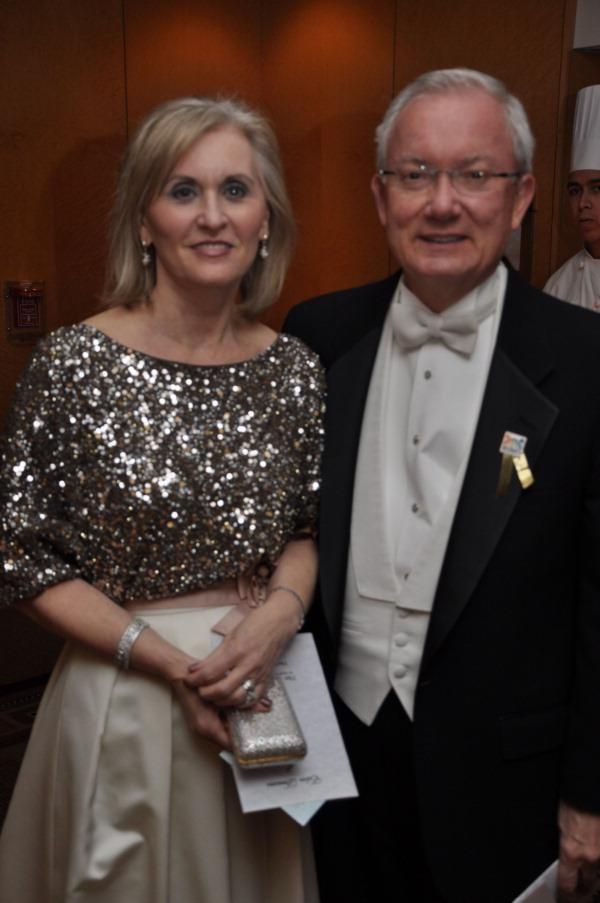 By Christian Kirkpatrick Special Writer
In January, it’s not easy to make winter look romantic. But an Eden Dreams gala can transport its guests from their dispirited memories of shoveling sidewalks and cleaning windshields into a crisp, white world of hope and beauty.
And so on Saturday nearly 400 guests came to the Hyatt Regency Princeton to attend Eden Autism Service’s 23rd annual dinner dance, “Dreams of Petrovskaya.”
The hotel’s ballroom had been transformed into the Bolshoi Theatre, and its anteroom, into a snowy landscape. Along the hotel’s main hall was an allée of ice-encrusted trees.
Throughout these rooms, guests encountered characters who could have stepped out of a 19th-century Russian novel: dashing military officers, a ballerina and her swain, noblemen in fur hats and peasant women wrapped in shawls.
All held clues that could help gala guests solve a mystery. Those guests who succeeded entered a drawing for two first-class tickets anywhere in the world served by Continental Airlines.
“This is a great party to help people support a great cause,” said Debra Stuhler of Hopewell. As enterprise-level leader of Bank of America/ Merrill Lynch’s Disability Employment Network, Ms Stuhler said she supports Eden because it teaches autistic individuals life skills.
“Supporting Eden is a wonderful way to give back,” declared gala co-chair Mark Berkowsky of Cranbury. He should know. This, he said, was his 20th Eden Dreams event.
Gala co-chair Peter Franco, who was attending his 9th gala, agreed. Every year, he said, the dinner was fabulous. For “Dreams of Petrovskaya,” Hyatt prepared a five-course meal, based on Russian delicacies.
Eden had much to celebrate Saturday night. Its president and CEO, Tom McCool, reported that the organization’s new school at the Princeton Forestall Village is going up quickly. “We’ll move in this fall,” he announced.
In addition to classrooms, the school will include special areas in which students can learn work skills — a commercial kitchen, an office training room and a mini-convenience store. It will also contain Wawa House, which provides early intervention services to infants and toddlers and which was named for one of Eden’s important benefactors, the Wawa Corporation.
During dinner, the CEO of the Wawa Corporation, Howard Stoeckel, was presented the 2011 Friends of Eden Guardian Award, which recognizes Wawa’s longstanding relationship with Eden.
This relationship began, Mr. Stoeckel said, where “great things always start, at store level.” In 1980 at the Wawa on the Princeton University campus, Joe Bendas, who was then its manager, met a mother with a child who was a student at Eden. This, Mr. Bendas said, was his introduction to autism. Soon afterwards, Wawa developed a work placement program for Eden students, and Mr. Bendas hired the first.
“It was the right thing to do,” recalled the Hamilton resident. “A business should give everyone an opportunity for employment. We try to make our stores mirror their communities.”
Over almost 30 years, Wawa has employed more than 600 autistic adults in its work placement program, said Scott Kent, an area manager for the company. Wawa sponsors fundraising activities to support Eden and donates generously to it.
And the Eden graduate whom Mr. Bendas hired still works at the Princeton store.
Eden also presented another award Saturday night. Robert E. Humes received its 2011 Friends of Eden Visionary Award for his many contributions to the organization. The Montgomery (Skillman) resident served on the Eden Board of Trustees for almost 20 years and was its chair for three. He remains co-chair of “Nurturing Today, Embracing Tomorrow,” Eden’s $7-million capital campaign to build its new school and strengthen its endowment.
“It’s been a total pleasure,” said Mr. Humes of his association with Eden. “It’s been one of the most rewarding experiences of my life.”
A moving part of any Eden Dreams Gala is meeting Eden parents. Their stories of how the organization has helped their children emerge from isolation, frustration and sometimes self-mutilation are powerful reminders of why Eden exists.
Gina Del Giudice-Asch said that Eden turned her son’s life around after another program had given up on him. Eden tapped into Andrew’s strengths, she said, teaching him alternative means of communication. Eventually he learned to speak.
The Princeton resident said she also values the attention that Eden gives to the families of its participants. “Eden understands what it’s like for siblings. It treats the family as a whole.”
“The staff really loves the kids and loves working with them,” declared Robert Scharfman of East Brunswick. “I don’t know what we’d do without Eden.”
Sponsors for the 2011 Eden Dreams included Bristol-Myers Squibb, Munich Re and the Olsen Foundation.