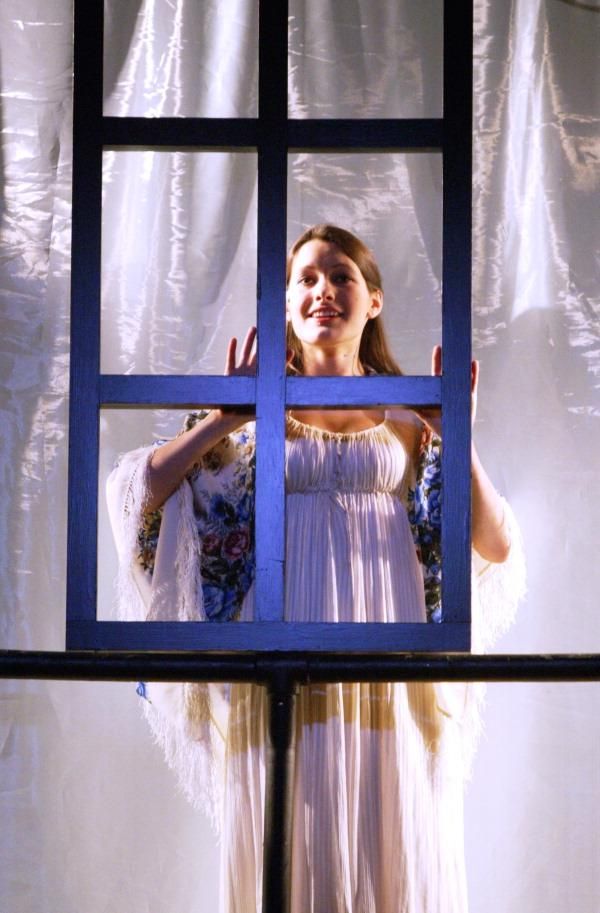 ‘In performance, the fluid, lilting verse is reminiscent of Shakespeare or of Richard Wilbur’s versification of Moliere … a most beautiful production, aurally and visually. Words can’t do

By Bob Briwn
On Feb. 9, a work that had been buried in Russian archives for more than seven decades stepped into daylight on a Princeton stage: poet Sigizmund Krzhizhanovsky and composer Sergei Prokofiev’s adaptation of Alexander Pushkin’s novel-in-verse, Eugene Onegin.
Because Krzhizhanovsky was a no-name writer in Stalin’s Russia, Soviet censors rejected his too-liberal treatment of the revered poet’s work. Thus its intended performance for the centennial of Pushkin’s death in 1937 was snuffed out. Although pieces of the work have been recorded since, we have Princeton musicologist Simon Morrison and Princeton Professor of Slavic Languages and Literatures Caryl Emerson to thank for the complete work’s rediscovery and first full presentation.
The opening night at Princeton’s Richardson Auditorium was a “choreographic adaptation,” with Prokofiev’s music and selections from Krzhizhanovsky performed by the Princeton Symphony Orchestra, Princeton University Glee Club, Princeton Ballroom Dance Club, and speakers. The following night, the theatrical adaptation directed by Tim Vasen was performed by Princeton University students, with pianist Anna Tchetchetkine playing Prokofiev’s score.
The latter production, reviewed here, is the more intimate of the two and will be presented in the Marie and Edward Matthews ‘53 Acting Studio, 185 Nassau Street, through Feb. 18.
Eugene Onegin is widely regarded as the beginning of modern Russian literature. It’s a masterpiece in Pushkin’s unique verse form, “an intricately rhyming 14-line stanza in iambic tetrameter,” as Emerson describes it in the excellent program guide. (By turns haunting and brilliant, the opera Tchaikovsky made of it in 1879 is one of the handful of Russian operas firmly established in the international repertory.)
For dramatic effect, Krzhizhanovsky pushed aside Pushkin’s ubiquitous narrator and gave his characters life by having them speak their own lines in verse. Princeton preserves the meter and rhyme in a translation by James Falen, translator of the best-selling English version of the poem. Director Vasen has imagined Krzhizhanovsky’s sometime-narrator (Matthew Spellberg) as the threadbare poet Krzhizhanovsky himself. The Soviet writer’s attempt to submit the work to a publisher in the opening scene becomes the frame for the unfolding tale.
In brief, the story centers on Onegin (Gabriel Crouse), a diffident young St. Petersburg dandy. Bored with life in the city, he repairs to the country, where he befriends a poet, Vladimir Lensky (Peter Giovine). Unlike the cynical Onegin, Lensky is passionate and somewhat naively romantic, gushing about his love for Olga Larina (Katie McGunagle). In a chance meeting at the neighboring Larina estate, Onegin finds himself the love-object of Olga’s older sister, the very romantic Tatyana (Elena Garadja). Onegin, however, rejects romantic attachments, of which he’s been the object many times.
Later, at Tatyana’s name-day celebration, Onegin tells off the lovesick woman (who has had a terrible nightmare about him) and instead flirts with Olga, much to the anger of Lensky, who challenges him to a duel. When the duelers’ seconds offer no chance to settle the dispute, shots are fired and Lensky lies dead.
Disillusioned, Onegin roams away, Olga marries someone else, and Tatyana visits her love-object’s now-abandoned dwelling. After years pass, Onegin again encounters Tatyana, this time at a fancy salon. She has married and is now a renowned beauty. Tables turned, Onegin is now smitten and pursues her relentlessly—despite her rejections. In a final scene, Tatyana is the one who lectures him. Although she still loves Onegin, she will remain faithful to her husband.
In performance, the fluid, lilting verse is reminiscent of Shakespeare or of Richard Wilbur’s versification of Moliere. Crouse is amusing in opening scenes, as the very idle and self-involved Onegin casually tosses things on the floor for servants to pick up, or displays a sheaf of love-letters from young women he has spurned. The counterpoint is Giovine as the wide-eyed Lensky, in puppy-love and easily ignited at the hint of insult (the hot-headed Pushkin himself fought dozens of duels, losing his life in the last one).
As Tatyana, Garadja is effectively melodramatic, just as you’d expect a love-obsessed young woman to be. In her nightmare scene, she’s pursued by a bear and witnesses a wild encounter with ghosts, Onegin, and Lensky. The hysterical girl transforms into a serene, controlled princess in the later scenes, while Onegin travels in the opposite emotional direction.
Prokofiev’s score, through thematic tags and repetitions, comments on and supports the action and characters’ state of mind, but without insisting how an audience should feel at any one point. It is distinctive and recognizable, with lyrical moments that are gorgeous and elegiac, others fateful. Morrison’s program notes on the music are an illuminating guide. Besides lively piano, there are a few recorded excerpts from the orchestral score and the Glee Club. My only cavil is that the music volume sometimes drowned out the speakers.
Jeffrey Kuperman’s imaginative, colorful video projections of Russian scenes, flora, and celestial heavens expand the stage setting, and elaborate period costumes by Caitlin Brown and Cindy Thom are very authentic. It’s a most beautiful production aurally and visually. But words can’t do it justice. As Vasen says in his Director’s Note, “this ‘Eugene Onegin’ is irreducible. Like Pushkin’s dazzling original, it resists explanation and demands to be experienced.” So go experience this unique theatrical event in its world premiere.
The “words-forward” stage adaptation of ‘Eugene Onegin’ continues at the Marie and Edward Matthews ‘53 Acting Studio, Lewis Center for the Arts, 185 Nassau St., Princeton, Feb. 16-18, 8:00 p.m. Tickets: $12 general, $10 students, 609-258-9220, www.princeton.edu/utickets.