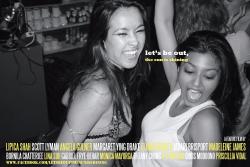 Margaret Ying Drake (l) and Lipica Shah, in the roles of Teeny and Diya, share a jubilant moment on a promotional postcard for the feature film, “Let’s Be Out, the Sun Is Shining,” an official selection of the 12th annual New York Indian Film Festival. GABRIEL FRYE-BEHAR Lipica Shah has come a long way since her days as a shy girl growing up in Millstone. Soon to hit the big screen in a starring role, the Manhattanite has not forgotten her roots.

“I had stage fright for the longest time,” Shah said. “In high school, I kind of came out of my shell and got to know who I was as a person.”

As a student at Allentown High School, she was forced to face her fear of the limelight by taking a dare to audition for the school musical. She landed the lead, and hasn’t looked back since.

Upon graduating in 2005, Shah was at a crossroads. She could pursue her interest in science and forensics, or take the less certain path of going after her real passion — acting. 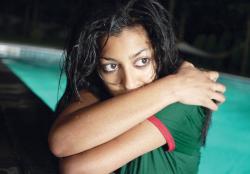 Lipica Shah, in her role as Diya in the film “Let’s Be Out, the Sun Is Shining,” takes a pensive moment. GABRIEL FRYE-BEHAR She struck a deal with her parents: she would audition for New York University’s Tisch School of the Arts, and if she were accepted, she would go.

“I figured if I don’t try it now, I probably never will,” she said.

Not only was Shah accepted, she also finished the four-year program a year early, graduating in 2008.

Fast-forward four years of what could be the story of any aspiring actor — chasing down auditions and opportunities at every turn, hoping for that one big break.

“It has been a process,” she said. “There is so much work and waiting around. You really have to make your own luck and your own opportunities.” 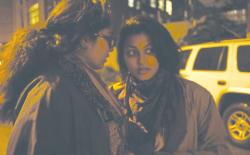 Director Bornila Chatterjee (l) talks with Millstone native Lipica Shah during the filming of “Let’s Be Out, the Sun Is Shining.” GABRIEL FRYE-BEHAR Following her own advice, Shah collaborated in 2010 with fellow Tisch student Bornila Chatterjee, a film student.

Chatterjee wrote a screenplay — her first feature — initially titled “Oh, Sophia,” which was later changed to “Let’s Be Out, the Sun Is Shining.”

Shah auditioned for the film and was cast in the starring role of Diya, a shy, romantic Indian-American receptionist who falls for Paddy (played by Scott Lyman), a Brooklyn bartender to whom everyone is expendable.

When Paddy rebuffs Diya’s advances to opt for another woman, she plunges headlong into his circle of struggling actors and musicians in Bushwick, Brooklyn.

Although the changes in Diya’s life do not bode particularly well with her family members, the excitement and allure of this new group of friends have profound effects on Diya.

“We really crafted this character together,” Shah said of her work with Chatterjee on Diya.

The “very, very low-budget” indie film took 20 days to shoot, with Chatterjee directing. Molding it into the finished project it is today, however, took much more time. Chatterjee undertook the long editing process, and then set about working on the audio, as well as getting clearance to use songs featured in the film.

After that, they sought feedback from outside sources, making changes as they and their impromptu critics saw fit.

“It is a complete and total labor of love,” Shah said. “It’s been a long time coming. It went through several iterations before we got to the film we have now.”

Once the film was complete, they began submitting it to be included in film festivals throughout the country.

She and Chatterjee were understandably thrilled to hear that the film had been accepted out of hundreds of submissions for inclusion in the New York Indian Film Festival.

“We were off the walls [with excitement],” she said.

“Let’s Be Out, the Sun Is Shining” is one of only three films from New York to be featured in the festival, with many of the others produced internationally, according to Shah.

She said it’s fantastic to have it featured so close to home, because the setting of Bushwick, Brooklyn, is so much a part of the film.

“It’s almost a character in the film,” she said.

As much of a role as the setting plays, Shah apparently shined even brighter in her role as Diya.

Two weeks ago, she got a call informing her that she had been nominated as one of five hopefuls for the festival’s “Best Actress” award.

“I’m so beyond excited about it,” she said. “It’s just really nice to be sharing the stage with these other, amazingly talented actresses. Just being nominated is great.”

On the topic of being an Indian actress in an industry that has historically cast Caucasians in most mainstream starring roles, Shah acknowledged that there is a feeling of being pigeonholed at times.

“I think every ethnic actor has that feeling in a sense,” she said. “I think as far as television shows, there is more diversity these days. I welcome all opportunities.”

Looking forward, Shah said she would like to work on more indie films, as well as in television.

“I really love working on collaborative, original work,” she said. “I really want to create interesting, quirky characters from scratch.”

According to Shah, Diya is a character that is so different from her in some ways, but in others, they have commonalities.

Shah, Chatterjee and others involved with the film have been spreading the word about its premiere at the festival, hoping to garner a large audience for their big red-carpet event.

“We’ve been publicizing the heck out of this,” she said. “I just want to share the story with as many people as we can.”

Lots of friends and family members — including Chatterjee’s mother, who is flying in from India — will attend, and Shah said they are hoping that they can take home the “Audience Choice” award if they can bring in a large enough audience.

She also hopes to see familiar faces from her hometown.

“I hope more people from home will come,” she said. “It would be great to see everyone again.”

“Let’sBeOut, the Sun Is Shining” is slated to premiere at the 12th annual New York Indian Film Festival at Tribeca Cinemas Theatre 1 on Saturday, May 26, at 3 p.m.